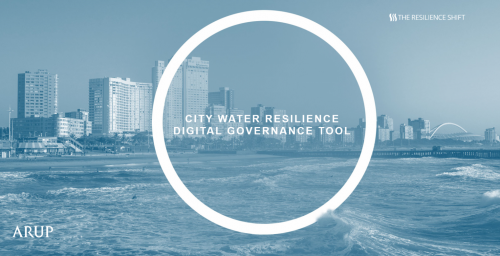 A new digital resilient water governance tool, WaterShare, was introduced at the Global Engineering Congress 2018 through a presentation by George Beane from the City Water Resilience Framework. It is being developed by the Resilience Shift and the City Water Resilience Framework in partnership with SIWI and OECD. You can read George’s slides here or read the feature below which explains more about the development of the tool, the related work and plans for next year.

Water governance is complicated, and especially complicated for cities. Natural hydrologic cycles do not fit neatly into administrative boundaries, and this makes governance quite complicated.

We know all this, because over the past year we’ve worked closely with eight cities around the world – Cape Town, Mexico City, Miami, Amman, Thessaloniki, Manchester, Rotterdam and Hull. We’ve talked with over 700 participants during 10 workshops, and 38 structured interviews.

Throughout this process, it has become apparent how critical the role of governance is in building resilience and has raised many questions about how relationships, between government, the private sector and civil society, foster resilience?

To better understand governance, the City Water Resilience Framework has worked closely with the Resilience Shift and partnered with the Stockholm International Water Institute and the OECD, who are both international leaders in this field.

Throughout this engagement we’ve heard a number of things that inform how we think about building resilience. Specifically related to water governance, over and over we hear that there is a real need for collaboration, for sharing information across departments, between levels of government and between critical sectors.

We know that the climate is changing. We also know that the world’s population is growing and, simultaneously becoming more urbanized. The combined consequence of these three facts, is that risk is increasingly concentrated in cities and will become even more so over the next century.

For instance, in the United Kingdom, we can expect an increase in urban flooding, which will affect growing numbers of people. The way flooding plays out in the UK is very different than Manila. The resources available to address these challenges, the appropriateness of potential solutions, these things vary according to context. As do the hazards that will be confronted in each place. For instance: flooding in Manila and the UK. Drought in Cape Town. Water pollution in Mexico City. The list goes on. And, of course cities confront multiple shocks and stresses, often at the same time.

Further complicating this is the fact that cities are themselves made up of complex systems that interact with other systems. So, water infrastructure relies on energy infrastructure. Energy is the obvious one, but water is tied to transportation systems, waste management, public health, policing, telecommunications, etc

The question of collaborative governance is one key challenge we’ve identified. Together with our partners we have been developing a tool to help address this particular challenge.

Our Resilient Water Governance tool, which is called WaterShare, is a digital, desk-top based application. It allows users to answer the questions

It does this by helping users map out all the elements of their urban water system – how a lake is connected to a water plant, which supplies water to a certain part of the city, for example. 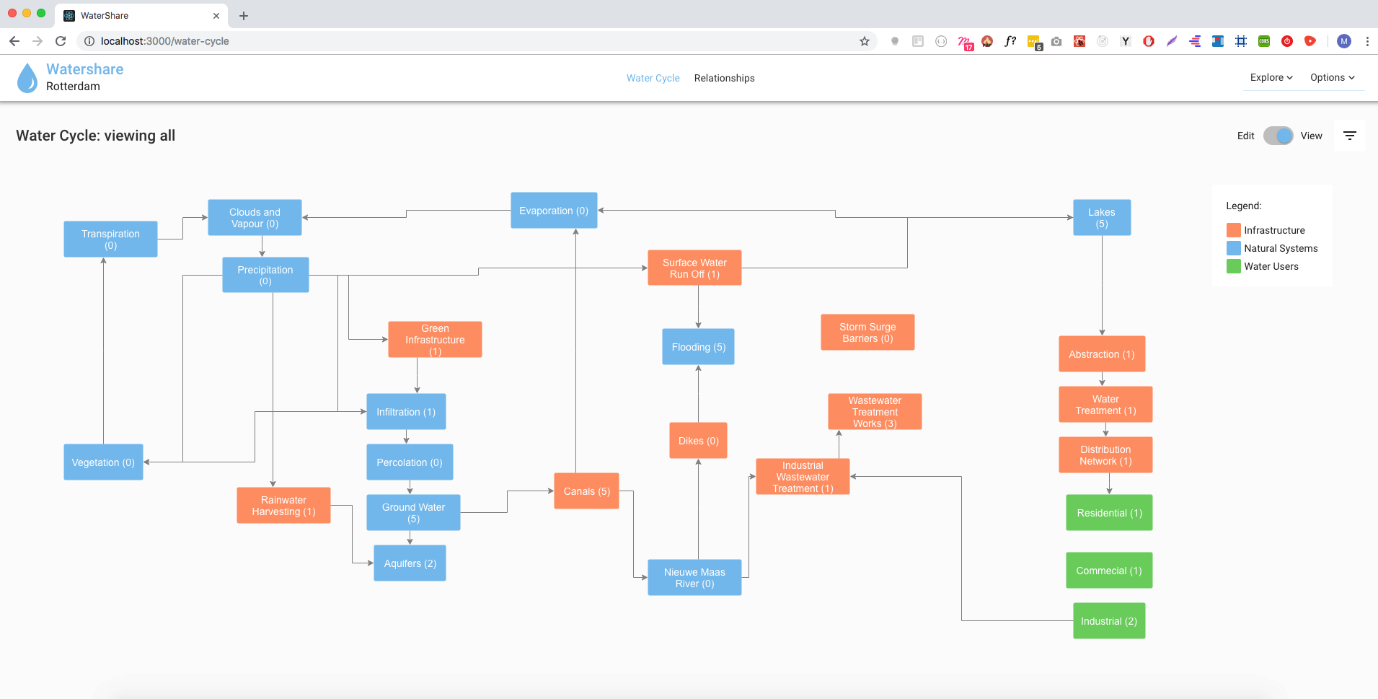 Each box on the screen represents some asset in the system – a river or a treatment plant or an end user. The lines show connections between these assets.

You can customize the tool for your city, adding the particular features that are relevant to you. For example, coastal defences might be relevant to Rotterdam but obviously wouldn’t be for landlocked Mexico City.

The user can also see which assets will likely be affected by different stresses or shocks. You can interrogate each individual asset. Where is major piece of infrastructure located? Who owns it? And see which stakeholders are involved in managing these and in what capacity.

This last piece is critical because it speaks most directly the role of governance in determining the health of a system. Are there roles that need to be filled that aren’t? Are there too many organizations involved in one particular role? 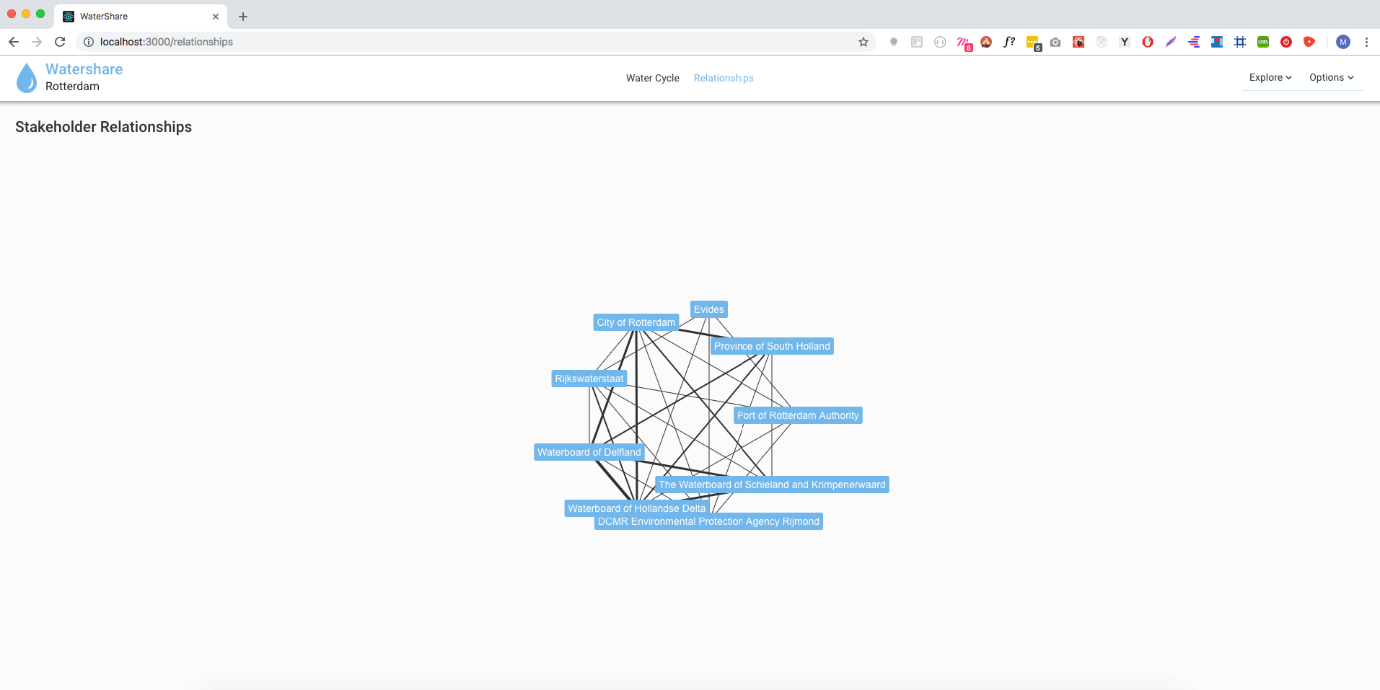 You can map relationships between actors with the lines and boxes showing all the stakeholders involved in the water system.

The thicker lines refer to stronger relationships. i.e. where there are organizations involved in the same asset or connected in the system. And you can select for one of those organizations to see how it relates to the rest.

The power of this is the potential to reveal latent relationships, to show where there is overlap in the remit of different organizations but perhaps these organizations are not actually speaking with each other

This work – not just the tool itself, but the broader project of defining and building resilience – has itself really embraced a collaborative approach, not only with our project partners, Arup, The Resilience Shift, SIWI, OECD but also with the cities themselves.

Having close partnerships has been absolutely fundamental to this work. And we have and continue to see this as an iterative process, a process of co-learning, testing and refining.

We are happy to work with new partners and collaborators and to share our experiences building this tool. You can contact us via info@resilienceshift.org

Other outputs will be derived from this work including the eight Cities Reports to be published later this year. From the next stages planned for 2019 we’ll be building on the model of the City Resilience Index, with the development of a water resilience Framework Assessment Tool being developed as part of the City Water Resilience Framework.

A beta version of WaterShare is planned to be ready for testing next year.