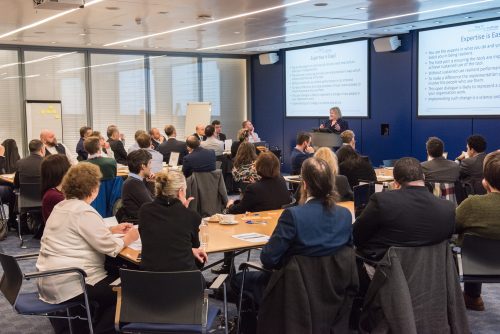 Earlier this month in London, we held the third in a series of workshops focused on tools and approaches to explore ways and means of implementing critical infrastructure resilience. Bringing together tool users and developers creates an opportunity to explore the issues faced in the implementation of resilience tools.

This workshop focused on organisations representing the ‘Operate and Maintain’ end of the critical infrastructure resilience value chain. Read more on how the Resilience Shift is using a value-driven approach.Participants included a wide range of tool developers and potential users of such tools and approaches including government advisors, regulators and, infrastructure operators and owners. 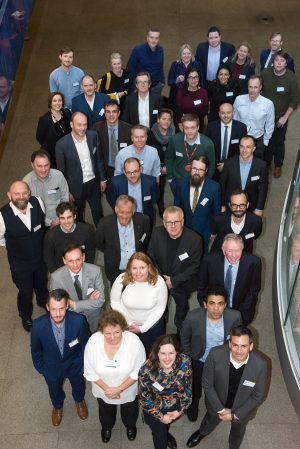 The Resilience Shift aims to identify and assess the tools and approaches that contribute to enhancing the resilience of critical infrastructure, making them accessible to those who will benefit.

Facilitated by The Schumacher Institute, and applying the Action Learning methodology developed by Mairi McLean and Simon Gill, the workshop built on the success of the first two workshops in this series, that took place in New Orleans and Washington DC. For more on Action Learning see our blog ‘Using Action Learning to explore resilience challenges’.

The workshop was split into three key sessions, that included Demand, Supply and Support. We expanded on these below.

We asked participants what their needs and challenges were in terms of implementing resilience tools.

A view that many attendees shared was reflected in an attendee’s comment of “It can be overwhelming seeing how much is out there, how do we choose?”.

Many said that there’s a significant gap between resilience research and practice. The digestibility of academic papers was recognised as a barrier, alongside the overall complexity of resilience concepts and the tools and approaches available.

This linked to some saying that the interpretation of resilience is difficult and varies across businesses and sectors meaning there isn’t a common language. This can be exacerbated by culture differences. However, others identified that people aren’t necessarily resistant to change, they just don’t have all the facts yet. This led many to agree that standards and guidance are needed for implementing resilience.

The ‘Supply’ session gave five tool developers an opportunity to pitch their tool and the ways that it is being used and accessed. Tools presented included:

Participants were then invited to a ‘marketplace’ session where potential tool users could ask questions to the individual tool developers.

“This event was incredibly helpful for learning about different resilience tools and provided a constructive discussion about how to tackle some of the issues that practitioners are facing – it was great to have so many valuable ideas from a wide range of organisations, researchers and technical experts.” Dr Manuela Di Mauro, National Infrastructure Commission

Many asked questions focused around several key themes. Firstly, users wanted to understand the amount and type of data needed for input. Understanding of where the tool is focused, for example, who is the customer, what scale (e.g. city, regional, national) is it sector specific, and is it intended for anticipating, response planning or mitigation assessment.

Tool or approach outputs were also discussed, for example whether it can provide a return on investment for implementing resilience measures.

Importantly, success stories of tool implementation were regarded as something that would increase potential uptake.

The final session discussed the ‘Support’ needed by users and developers, in light of their experience and reflections on the day. The following key themes emerged.

Several participants said that users don’t always know what they need. And that available tools and approaches typically focus on ‘what it is’ rather than what the outputs will be. It is ultimately outputs that will support business decisions, which is what users identified as important to them.

Many expressed a need to develop use cases for tools and approaches. Some suggested that a developer forum is needed to exchange ideas with potential customers.

Users can find it difficult to procure tools and approaches, more so for businesses in a heavily regulated environment. Often assurance for small enterprises with bespoke tools isn’t there, and so larger providers are chosen, although may not be the preferred option. It can also be difficult to fund the customisation of tools to suit the challenge faced by the user.

“We all agreed that today’s approach, the way the whole workshop was set up, especially the composition of people in this room, trying to match tool developers and users can be described as a huge success”. Workshop participant.

Look out for a full event report that will be published shortly.

More about the ‘Tools and Approaches’ project.