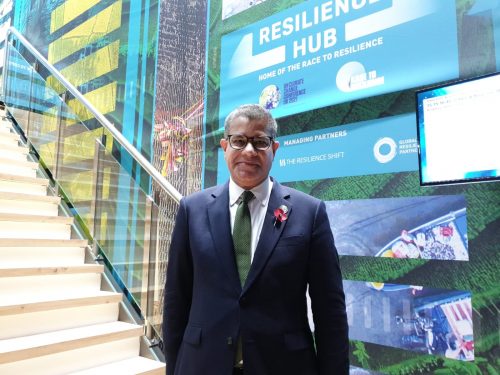 With 154 events from 80 partners and featuring 176 participating organisations, the first ever COP Resilience Hub brought together a community of state and non-state actors in an unprecedented collaboration, and was attended by many senior leaders including Alok Sharma (pictured), the COP26 President.

In a High-level Plenary session at the end of week 2, Nigel Topping, High level Champion for Climate Action at COP26, said, “We’re delighted that the Resilience Hub has been a real success here and we hope that it goes from strength to strength to draw more attention and direct more resources to resilience solutions”.

As well as being the home of the Race to Resilience at COP, the programme was led by Hubs from around the globe – South Asia, Latin America, Africa, South East and East Asia, and the Pacific, as well as from the Blue Zone in Glasgow and from Glasgow Caledonian University. The key philosophy shared by all managing partners and the UN High Level Champions’ Race to Resilience team, was that it should be a place to share voices from around the world and to give access for audiences worldwide to events at COP26 on adaptation and resilience.

The physical Hub in the blue zone welcomed over 10,000 visitors, while 7,500 people registered for the virtual programme of live events, with an additional 23,000 users visiting the website and of these, nearly 5,000 further following the live stream.

Through its creation, the Hub embodies the first-ever official climate metric of human lives improved, alongside the long-standing measurement of metric tons of CO2 avoided. The Race to Resilience has set a bold goal of reaching four billion people with resilience and adaptation solutions by 2030. Already, R2R partners have made commitments to build the resilience of 2.4 billion people. This is a beginning and we must – and will – do more.

All 154 event recordings can now be viewed on the event platform and will subsequently be available until COP27 as a knowledge base on adaptation and resilience via the Resilience Hub website at https://cop-resilience-hub.org/

In addition to this, film showcases from WaterBear, BBC Media Action, and the Life at 50ºC series will also be available for a limited time during the remainder of 2021, alongside other materials such as the Daily COPpuccino interviews with resilience thought leaders.

The three managing partner organisations were especially delighted to see events at the Hub feature commitments on action and finance from state and non-state actors and from partners in the Race to Resilience.

They would like to express their thanks to sponsors, partners, participating organisations, and visitors to the Hub, and to the delivery team who made the Resilience Hub such a success and are looking forward to working with them again at COP27.

Watch highlights from the Hub