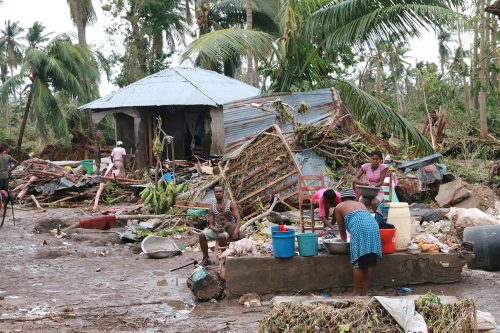 Carbon costs should be considered alongside capital costs in decisions on building infrastructure, according to panellists speaking at the Americas leg of the Brunel International Lecture Series, which took place on 19 May 2021.

Tony Gibbs, past president of The Barbados Association of Professional Engineers and a past vice president of the UK’s Institution of Structural Engineers, now works as a consultant specialising in designing infrastructure to withstand the forces of extreme weather and earthquakes.

Gibbs told the lecture’s virtual audience of the high cost of damage caused by hurricanes, storm surges and torrential rain that had battered the Caribbean region in recent years.

“The major challenge for civil engineers in the Caribbean is that losses from single natural hazard events routinely reach the level of the gross domestic product of small island states. This is not affordable,” he said.

“The cost of rebuilding should therefore be considered in decision-making about infrastructure construction, not just the initial capital outlay, Gibbs suggested. “The most expensive projects are those that fail because they have to be rebuilt.

“Avoiding having to rebuild infrastructure would also be a key contribution for the region in mitigating climate change, given the significant carbon footprint of the construction industry,” he said.

Laurens van der Tak, director of water resilience for the Americas at consultancy Jacobs Technology, added that resilience and sustainability needed to be part of the mainstream consideration of every decision.

Valuing of resilience versus cost

“Don’t just design to the standards – it’s very easy for old-school engineers to say: ‘Well, that’s what the standards say you have to do.’ Engineers should look at the full lifecycle cost of projects and make sure people understand the value of resilience, as well as the cost,” he said.

Seth Schultz, executive director of The Resilience Shift, said that different techniques such as blue-green infrastructure should be used when building, since emissions associated with the use of concrete and steel would undermine decarbonisation. Blue-green infrastructure is an approach to urban flood resilience that capitalises on the benefits of working with urban green spaces and naturalised water flows.

Schultz stressed the importance of applying high-level systems thinking, asking, for example, if it would be better to build a seawall to protect the 14 million residents of New York from sea level rise, or to move the people.

“This sounds outlandish but our entire process of development aid is to go in and clean up after a problem – we can’t keep spending billions and trillions of dollars fixing problems that we know will be repeated,” he said.

Schultz delivered the lecture as part of his virtual world tour, entitled 21st century leadership is partnership: how a coalition of the world’s engineers can change the world, which is taking in eight stops around the world.

Each lecture is tailored to the region and is followed by discussion between Schultz and a range of industry leaders.

Do we have the skills?

A key theme being tackled in the lecture series is the sector’s capacity to tackle climate change. There is a need not only to grow skills and diverse thinking among existing engineers but also to train and recruit large numbers of new engineers from a variety of backgrounds.

Marcelo Nóbrega, an international HR and strategic leadership consultant from Brazil, said that different rules, standards and methods would need to be applied to engineering work if climate change was to be tackled.

However, he added: “Humans do not like change, so I suspect that the real solution to our current challenges will only come from the next generations of engineers.”

“To achieve this, engineering courses needed more emphasis on skills such as leadership, entrepreneurship, negotiation and influence,” he said.

“Workplaces should be made more inclusive to stop women leaving the sector, while people from less financially privileged backgrounds should be supported to join it,” he added.

This article was first published on the Institution of Civil Engineers website and was written by Catherine Early. Many thanks to them for allowing us to share this write-up on the Resilience Shift website.