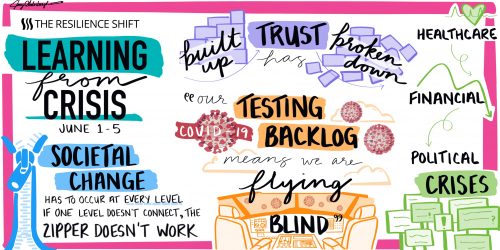 “Politics always got in the way of the public interest. This time it was completely different. We understood we are all human beings that could be affected – no one was safe. This brought our society together.”

Why is it that, having reflected on trust in Round 2, we find ourselves back on the same issue here in Round 7? Could it be that trust is the very spine holding people, organisations and cities together? How does it work? Some trust is hard-earned, such as staff learning, from many transactions over time, that they can rely on and confide in their leaders. Another form of trust is born out of necessity. In the early days of the pandemic, little was known about the nature of the risk, other than that it could be fatal. We could not afford the luxury of disagreement, and therefore most people decided to trust that their leaders and went into lockdown with barely a murmur.

But what is true for trust in general is that we have a collective ability to build it and break it down. Where the rules are seen as fair or inevitable, trust likely remains. But when leaders make exceptions for themselves trust can crumble rather quickly. A striking example can be found in the actions of the UK Prime Minister’s chief advisor, Dominic Cummings, who decided to break lockdown rules by travelling across the country multiple times, and in doing so – and being defended for it by his boss – blew a hole in the public’s trust in the government’s management of the crisis.

One Chief Resilience Officer underscored the importance of fairness in building trust: “We have seen such strong collaboration in the city and the state. Before, politics always got in the way of the public interest. This time it was completely different. We understood we are all human beings that could be affected – no one was safe. This brought our society together.”

Another CRO observed that trust between actors in his city has deepened due to extensive collaboration in the past months. “While there were gaps and drawbacks, a lot of trust was built between governments, citizens, and corporates. Many will continue their active involvement beyond the immediate crisis. And through all of this, government now knows who the active players are who can help, and businesses are more aware of how the government operates and what their constraints are.”

Trust and confidence in leadership and colleagues, noted one of the corporate leaders, are not a given, and expiry dates approach as the days go on:“Culturally, the sense of collegiality seems to have survived quite well – it helped that everyone around the world was experiencing the same constraints – but I’m worried that if we had to carry on staying away from the office and each other for much longer, that might start to dissipate. There may be no substitute for simply being together in one place.”

A second corporate leader added yet another perspective, saying that in many ways and in some countries, the thought we were already beyond the expiry date of trust: “The thing that has broken down the most in this pandemic is trust. Trust in the government’s ability to protect and take care of me in a force majeur situation. Trust in the infrastructure that I’m using and it’s resilience. Confidence in supply chains.”

Can we conclude that the presence of trust – or its absence – is a master indicator of likely success in dealing with a crisis? If so, we wonder, where might our levels of trust be in another five weeks’ time? And what mechanisms and behaviors will leaders put in place to keep confidence high?