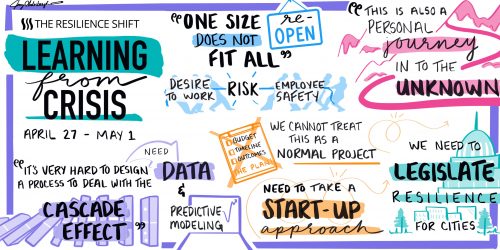 “While it has been incredibly taxing on me personally, physically, it has been the most fulfilling eight weeks of my life. It is a crazy time, but I feel particularly prepared and honoured to have a direct impact.”

This week our cohort was joined by a further two business leaders and three Chief Resilience Officers, strategic thinkers who are involved in the direct pandemic response or longer-term recovery in their respective cities. Witnessing the impacts of the pandemic on the ground takes its toll, but, as one of our participants reflected: “I get excited with the ability to figure something out, to the point where I am really targeted to make this work.”

Nearly two months into the pandemic that is occupying leaders globally, it is perhaps no surprise that this week some participants shared reflections on how their personal and psychological resilience is both a source of strength and is being put to the test.

For example, three of the participants have in the past few weeks been required to set up, from scratch: a dynamic organisational structure that’s flexible enough to meet the crisis; an public thought leadership platform and a set of socially-inclusive testing sites, all under tremendous time pressure and with a chronic shortage of solid certainties. In each case they reported a sense of amazement at how much they and their teams had been able to create in an absurdly short period. Some likened it to being in a start-up, where the need is clear, a motivating goal is set and then one’s days are filled with overcoming obstacles and changing assumptions as new information floods in. You act, you learn, you adapt, and you act again. Velocity is all.

Support for this highly entrepreneurial approach in a pandemic comes in a short YouTube clip from 16 March of Dr Michael Ryan (Executive Director at WHO Health Emergencies Programme) when he offered the following insights based on his experience of multiple Ebola outbreaks: “Be fast, have no regrets. If you need to be right before you move, you will never win. Speed trumps perfection. The greatest error is to be paralysed by the fear of failure.”

Much of the discussion this week turned around the challenge of re-opening one’s business or city after a lengthy lockdown. What emerged was a sense that, whereas persuading everyone to lock down and self-isolate involved a simple instruction and could be achieved relatively easily, asking people to come out of their safe homes and re-enter their workplaces was meeting a much more varied response. Our leaders have uniformly opted to consult with staff and communities, but the challenge of accommodating the variety of their concerns and preferences into a practical plan for re-opening is enormous, and may well test the early sense that ‘we’re all in this together’.

Legal aspects of re-opening are also coming to the fore. Cities take their lead – and a stream of new regulations – from national government. Yet the unintended consequences of these are felt, and have to be dealt with, at local level, often without adequate prior discussion with national government, or indeed resources. On the private sector side, what is the company’s legal liability if it re-opens a site and, despite best efforts, an employee contracts Covi-19? One thing is becoming clear: the brands and reputations of cities as well as companies are being revealed and tested against the toughest standard – that of their stakeholders’ need for care and protection.