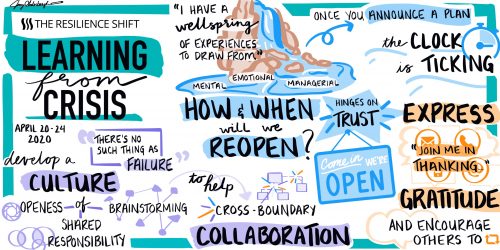 “We can’t know every single piece of the puzzle, but at least we have to have a very good sense of what those pieces look like, how we will make them fit together as much as possible, before committing ourselves to any level of public communication.”

This was a hard-won lesson, shared by one of our participants. It addresses the impossibility of creating and sticking to a comprehensive plan in such fast-unfolding times, while recognizing that one’s public (staff or citizens) will be yearning for at least some certainty. So don’t make promises if you aren’t pretty sure you can back them up. 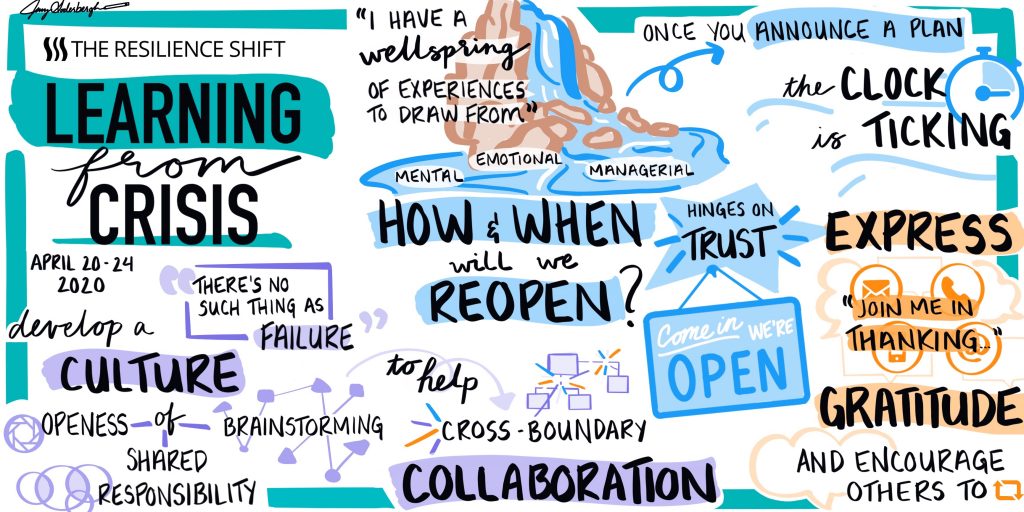 In this round, we welcomed three Chief Resilience Officers to our virtual panel of participants. Perhaps not surprisingly, in Round 2 our conversations often turned to the matter of trust. It appeared in two different guises. First, in relation to the taxing question ‘When and how do we re-open our organisation / offices?’ This is now on every leader’s mind and there is no template to follow. In most countries where a re-opening of the economy is being actively discussed, there remains a high level of risk and uncertainty, not only about the possibility of a second wave of infection, but also about the degree to which people will trust that it is safe to venture onto public transport, into public spaces and back into their places of work. While our participants are working out the best way to do this, their employees are at least appreciating being asked for their opinions on what would work for them.

The other dimension of trust is broader and more obvious – trust in one’s leadership. There can be no better test of leadership than a pandemic. We can see how national political leaders around the world are revealing their true values; the same is true in the city administrations and companies represented in our project. Uncertainty is endemic, and uncertainty breeds fear. So how to reduce fear in one’s staff and organisation, so as to remain highly functional?

It helps if one has been through crisis before and can recall the roller-coaster of emotions that can be set in motion when leading in a crisis. As one participant, reluctant veteran of a major crisis not long ago said,

“it has helped to know that, when there’s cause for great apprehension or trepidation, these are not unusual feelings to experience. I have a wellspring of experiences to draw from, not just mentally and managerially, but also emotionally, of what it’s like to be in charge in a crisis.”

Can one learn this without having to go through the fire? Perhaps not. And yet there are well understood lessons in crisis management, most of which seem to have been thinly distributed in normal management training.

Finally, we discussed the enormous stimulus packages being put together by governments around the world. They represent a rare, high-impact moment which could determine which way an economy/society will function going forward. What assumptions about the economy and about priorities will inform the way the money is distributed?