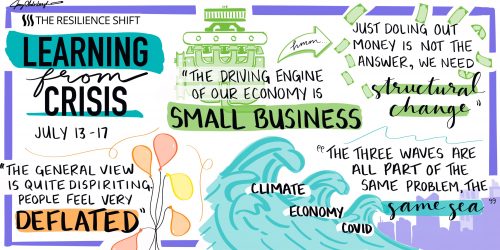 “Crises are best managed by the people who are closest to the action. Often the true nature of a crisis is hyper-local, so people close to it solve it.”

In Round 13, some of our participants brought the conversation back to decision-making powers and its location. We explored this to some extent early on in Round 5, where we discussed how institutional reluctance of different tiers of government to collaborate is frustrating in normal times, but can have dire consequences in a crisis. In Round 6, we touched on the value of making room for others to lead; whether a colleague, team, or organisation. And in Round 11, our conversations highlighted the importance of empowering those with knowledge on the ground, and why it seems so difficult to let go of authority.

It is safe to say that the location of decision-making is emerging as a critical dimension of crisis leadership. How far from the action, from the real-world consequences, should the shots be called? And when is a national or even global decision more effective? Is the world even ready for global decision-making?

One of our participants emphasised the importance of city-led decision-making:
“Even when public health affairs are nationally led, the heavy lifting and the shoulders here come from the municipal governments. (..) Cities are their own spheres of influence and power, and they need to make decisions for themselves because no one else is going to make them for them, or should.”

Sometimes, the unique circumstances of a city might mean that even the municipal scale may be too far from the action, as one participant noted:
“Right now there is a lot of autonomy given to the state and the city to decide what to do. But a lot of health facilities are with the private sector, and it’s really difficult for the city to have the kind of control where you can really serve society”.

Another participant observed that decision-making around the pandemic in their country had indeed been devolved to states and cities during the crisis, but wondered whether something else was driving this devolution: “But this is more, “Who am I going to blame for the health crisis and the economic crisis?.”

As there is a great deal of variation across the institutional fabric and decision-making capabilities between locations and organisations, there is no one-size-fits-all answer to where decision-powers should sit. But might there be some core principles that can be usefully applied in most situations? One participant suggested flexibility is critical, with feedback loops being in place and taken seriously:
“There is absolutely that moment where you need national coordination, when it comes to borders, organising medical supply chains and so on. But you do also need some flexibility within regions, to be able to respond to and provide feedback to national leadership.”

Covid-19 has taught us that, in a crisis, the location of power and decision-making matters much more than usual. Is it possible to determine a ‘right’ balance between central and local control? And if it is possible, can it be agreed in advanced, before crisis strikes? This would be the ideal, and is perhaps the norm in military circles, but in democracies maybe it takes a pandemic to prompt those tough, focused conversations about authority?