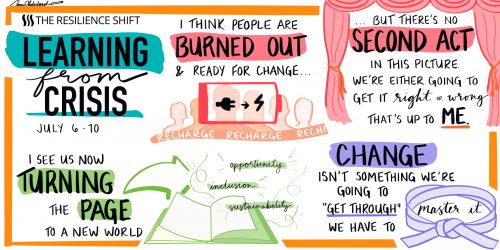 “I’m beginning to hear a couple people go, “I’m tired.” I’m thinking, “If you’re not exhilarated by this kind of change, then you may not be the right person for the role that we’ve got you in.”

In the early days of the Covid-19 crisis, several participants had identified the galvanising effect of dealing with a crisis together. This week, participants reflected on the personal attributes which have sustained them or their organizations through a seemingly endless crisis. What has fuelled the crisis management engine over the past months? What has spurred excitement, or sparked the energy to keep going? Or, as one participant noted, is having the drive and energy simply a core requirement of crisis leadership?: “You have to be relentless. Crises of this nature are long and hard, and no one else is going to pick up the slack for you. If you neglect it for a couple of days, or a week or two, it’s not like the universe has said, “Right. You as a leader need a break, or to focus elsewhere, so we’ll just keep everything in stasis for you.” You have to be driving it, day in and day out, and it’s very hard to delegate that. You can figure out who your drivers are, but it’s really for you to be keeping up your understanding and your pressure.(..) This was given to me, and I’m going to do it. That is what I mean by ‘it’s relentless’.”

Another participant echoed this sentiment. While a crisis soaks up high volumes of precious fuel, a crisis also provides fuel – fuel for the imagination and creativity: “Stop thinking about change as something we’re going to get through, but something that we have to master, that we have to be good at. I’m beginning to hear a couple people go, “I’m tired.” I’m thinking, “If you’re not exhilarated by this kind of change, then you may not be the right person for the role that we’ve got you in. Maybe we need to look at a different role if you find this exhausting.” My feeling is, get yourself in the mindset that, “This is normal. This isn’t strenuous. It’s not exhausting. I think differently now.” My imagination is a lot more lively in moments like this.”

In a similar vein, a third participant observed that the sustained excitement has opened the mind to a new realm of possibility for long-term change:
“I see us now turning the page to what I imagine to be a new world, or at least thinking about it. And I’m seeing it as an opportunity. I know I’ve been more open-minded, and so has my mayor. She’s been more willing to listen and try new things than I’ve ever seen. I think there’s an opportunity to leverage that excitement.”

This discovery that crisis brings out the best in some people – and may even lead to critical transformations that are impossible under normal circumstances – is not new, but gets forgotten in the gap between crises. Some would argue it’s part of how we became such a successful species in the first place. A larger question now looms, however, in the age of climate change: how to activate these extraordinary capabilities in advance of disaster, so that we gives ourselves the best possible chance of not actually reaching the disaster?