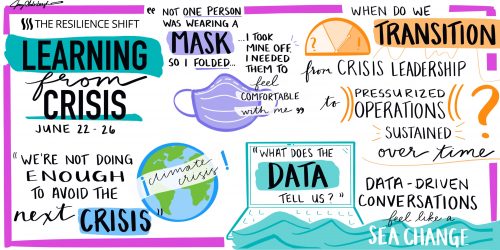 “You’ve already lifted a hundred weights, you took a break, and now you have to do it all again – only this time you know how heavy it was.”

While the media has been offering a mixed bag of somewhat optimistic good news stories of countries slowly unlocking, and more worrying items flagging increased case numbers and second peaks, many of our participants in Round 10 pondered how to sustain collective-minded, collaborative energy to keep chipping away, managing and responding to the crisis. One participant shared: “People are getting tired. Tired of not having any kind of light ahead. Where is the end of this?”

The initial adrenaline having long ago ebbed away, our longing for some sense of normality floods back in. But riding on that returning tide float some other habits that were happily absent in those early days. For example, as one participant put it, “Why are we wasting our time playing the same old political games again?”

How to maintain one’s own and one’s colleagues’ discipline and optimism? Here, surely, is a challenge for leadership – at all levels. The water is turbulent and murky, so we can’t see the bottom, but step forward we must. As one corporate leader put it, emphatically and with a simplicity born of long experience, “The people we are leading are looking for leadership.”

It shouldn’t go unnoticed, however, that the prolonged crisis is taxing on our leaders too. One participant reflected on coming back from a short break: “Personally I found it hard stopping and then having to start again, after taking a few days off. Stepping away allowed me to observe how much and how intensely I’d been working (..) you’ve already lifted a hundred weights, you’ve gotten the chance to break and now I have to do it again?! And you knew how heavy it was and how awful it was when you were starting. It was a surprising challenge. But then, I’d do it all again in a minute, so that was nice.”

Interestingly, some of our participants have been thinking about where a crisis can be deemed to have ended and a new phase begun. It seems helpful to make this delineation, especially as one ponders how to keep teams energised. One corporate leader observed: “A crisis happens when we have a disruption that says: ‘The tools we are using are not sufficient to weather what’s happening.’ We reached the point about three weeks ago on the global level where management decided that the things we can control, we now have under control. So we declared that we are no longer in a crisis.”

While some businesses may be beginning to shift out of crisis mode and into management mode, some of the Chief Resilience Officers are not quite there yet. But one of them did wonder:
“Where do we start to make the transition from crisis leadership to something one could describe as ‘pressurised operations sustained over time’?” and “Back in the day, we anticipated the peak would be a sharp curve that lasted two or three weeks. And now it is longer and flatter. So what is of concern to me is how to manage that longer, harder slog that’s more about stresses on the system than shocks.”

So, in what is turning out to be a very extended type of crisis, can we say that this shift from managing the initial shock to adapting and recovering some kind of equilibrium, even while the source of the crisis is still very much in our midst, is a new and critical leadership challenge? Noting that it shows up just as leaders are themselves in real need of a break.