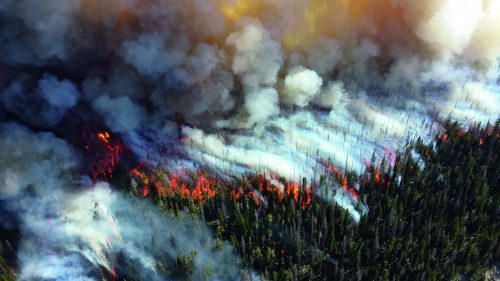 We know that climate change is here now (IPCC)  and resilience has been rising up the agenda as the world has tackled the impacts of the COVID pandemic and increasing weather-related events (WMO).

“Time’s running out for the things that keep us ticking”, says Seth.

Learning the lessons from past events, such as severe storms and wildfires, shines a light on what matters for resilience as these events are likely to become more frequent. In Texas, the extreme winter storm that struck in February 2021 left many dozens dead, millions without power and nearly 15 million with water issues.

Similar impacts resulted from Australian bush fires that severely affected the country, exposing a lack of resilience in the system with thousands of customers without power weeks later. As a wake-up call for urgent investment it highlighted the need for whole system thinking as we saw power outages have a direct impact on communications, food supply, transportation and contamination of water supply.

Both cases show the vulnerabilities of complex and interconnected infrastructure systems and the need to learn from others.

Peter Chamley, Resilience Shift Board member, and outgoing Chair of Arup’s Australasia Region, said, “We experienced similar but different events in Australia in 2019, and it shows the importance of sharing lessons and experiences globally and across sectors.”

“There has to be no better example than Texas of the inter-dependent nature of infrastructure systems and the need for resilience.”

These insights into what matters for resilience help us to synthesise lessons to be learned from such events, and in helping us to have a systems perspective on them. There are some key lessons to take away.

Humankind must learn to deal with difficult issues that won’t go away including decision making when faced with ongoing deep uncertainty, new extremes of climate occurring more frequently, and complex systems that are interconnected, interdependent and have the potential to create vulnerabilities. There is higher certainty that extreme weather events such as drought, flooding, more severe winters, and heat waves are exacerbated by a warming climate. It is increasingly important for us to trust the science and collaborate on climate resilience.

Australia has been warned it will need to be prepared to face multiple crises happening at the same time and it is not alone. Janille Smith-Colin, Assistant Professor, Southern Methodist University, Dallas, Texas, Department of Civil and Environmental Engineering, said, “The events truly represent a cascading failure. At its root was a failure to apply a systems perspective to conceptualize and model interdependencies that exist across water infrastructure and power domains”.

Preparing to be resilient also means broadening the risks you are looking at and considering wider technical issues. Electric utilities are in many cases working to build the resilience of their infrastructure. As they ‘winterise’ natural gas power plants, natural gas production, wind turbines and other energy infrastructure, through practices like insulating pipelines or by burying them, these approaches can also protect them from fire and other hazards.

In Texas, frozen and damaged water infrastructure structures, including fire hydrants, also caused issues with emergency situations involving fire and flooding. Another unexpected impact was significant releases of pollutants due to stopping and starting fossil fuel infrastructure such as chemical plants and fuel refineries.

Texas has a deregulated energy market largely isolated from the rest of the country’s power grid and designed to avoid federal regulation. It has its own grid, its own generation, transmission and demand. That has allowed it to rapidly expand on renewables in the grid, but also lacks the redundancy of the national grid and federal coordination. Of the total installed capacity to the Texas electric grid, about 40% went offline during the storm.

No one company owns all the power plants, transmission lines and distribution networks. Instead, several different companies generate and transmit power, that they sell on the wholesale market to yet more players, who in turn sell to homes and businesses. This creates a fragmented structure with no common goal, values or incentives to invest.

In 2011, Texas experienced a similar storm that froze natural gas wells and affected coal plants and wind turbines, leading to power outages across the state. Conclusions then were that more thorough preparation for cold weather could have prevented the outages. However, instead of taking any regulatory action to winterise the energy systems, the guidelines produced were not mandatory, and were unenforceable. The choice to prepare for harsh weather was left to the power companies — many of which opted against costly upgrades.

We cannot forget the human part of the system

The combination of below freezing temperatures with no power for heat led people to undertake dangerous ways of heating their homes. As well as deaths from car crashes, drownings, house fires and hypothermia, at least 300 cases of carbon monoxide poisoning were reported from people running their cars or generators indoors for heating. Similar fatalities happened only a few years earlier in the 2009 ice storms and could have helped others be better prepared.

Trust and collaboration are fundamental to enabling transformation of infrastructure systems

The global energy system is undergoing rapid transformation and over the next 30 years, huge shifts are expected in system infrastructure, operation and regulation. Creating a system that can be relied upon to meet the daily needs of individuals, businesses, services and government, while simultaneously changing, is fundamental.

Providing a resilient energy supply will require policy, investment and industry to work in tandem and create a more collaborative and inclusive industry that can be trusted to deliver, no matter what the weather.

Juliet Mian, Technical Director, The Resilience Shift, said, “This shows us the importance of trust and collaboration – across the energy sector and across wider systems. No one will get through this type of event well on their own.”