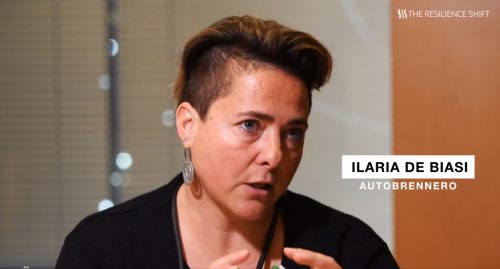 This highways infrastructure operator in Italy manages and operates a major motorway. How does it put resilience into practice?

As part of our work exploring resilience tools and approaches, the Resilience Shift spoke to Ilaria De Biasi, Head of European Projects Department of Autobrennero (Autostrada del Brennero S.p.A.) that manages and operates a major motorway that connects Italy and Austria. The Autostrada A22 is a 314km Italian motorway which connects the city of Campogalliano and the A1 motorway to Austria through the Brenner Pass.

In the interview, we asked what resilience means for Autobrennero, what this means in practice, and which resilience tools they used.

Ilaria highlights how resilience is very important for the motorway as a physical structure and in terms of its functions – to carry users and goods – and both aspects must be considered in terms of resilience when planning, maintaining and dealing with emergencies. The motorway is managed according to sustainable mobility principles as it crosses many important environments including the Alpes, and it is affected by many different natural hazards. She also explains how they use physical tools such as sensors to monitor viaducts, slopes, and so on, linked to the traffic control centre, but also management tools to help quickly recover from situations. Involving stakeholders is key, and they are also using innovative technologies.