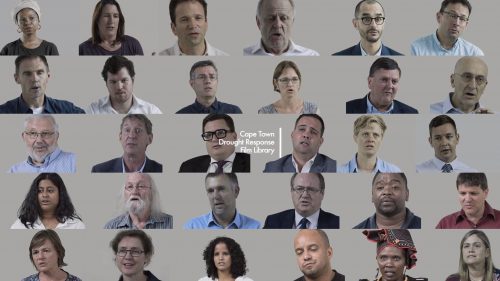 The Resilience Shift is proud to have supported an innovative online resource sharing lessons from Cape Town’s water crisis of 2017-2018 that is set to help city and business leaders around the world to build resilience.

Building on the initial launch of trial learning modules in 2019, the new website for the Cape Town Drought Response Learning Initiative now offers nearly 100 curated films on various aspects of the 2017-2018 Cape Town water crisis, including 39 in-depth filmed interviews and the full 16-module Learning from Crisis series, each module of which addresses one of the major themes that emerged during this period.

Topics include the role of data and information in maintaining and building public trust; the measures that were effective in bringing about household behaviour change; the role of business; the impact of the Day Zero communication strategy; the limits to large-scale emergency water supply augmentation projects; inequality and social cohesion in a crisis; underlying systemic issues which exacerbated the impact of the drought; the costs to agriculture and agribusiness; the role of politics and leadership.

The architects of this initiative are both Cape Town citizens and they have spearheaded this unique resource now freely available online for use by decision-makers and urban resilience professionals around the world to reflect on critical infrastructure challenges in their own cities. It is also a valuable resource for educators and students.

Peter Willis, an independent facilitator with Conversations that Count and partner with The Resilience Shift on the Resilient Leadership initiative, and filmmaker Victor van Aswegen of CineSouth Studios, have collaborated to build a distinctive learning resource through the Cape Town Drought Response Learning Initiative. Over a two-year period they assembled the most comprehensive resource of first-hand reflections on the crisis and distilled key insights and learnings from the material.

“One of the standout characteristics of the crisis,” says Victor, “was its multifaceted nature, encompassing issues ranging from engineering to communications to public finances, from trust in government to cooperation among citizenry, from restrictions and tariffs to economic fallout. Our aim with the initiative was to contribute to an improved understanding of a complex and often contested and misunderstood event that had far-reaching public-interest implications. We did so by first filming interviews with experts in the various fields, then identifying the central themes, and finally producing films and text outputs systematically dealing with these themes one by one.”

Peter adds that the initiative has succeeded in providing a very rich and previously unavailable perspective on the water crisis, made possible by the generous support and cooperation of a large number of individuals and organisations. “All our outputs draw on the reflections of 39 leaders from government, business, academia, consultancy and civil society, who gave generously of their time for the filmed interviews. We assembled a broad coalition of corporate and academic partners, including global not-for-profit The Resilience Shift and UCT’s African Climate & Development Initiative, as well as many corporate donors, without which the project would not have been possible.”

Globally, the norm for post-crisis analysis of this nature is that it is commissioned and delivered by government bodies, with findings presented in official reports. The fact that this initiative was conceived and undertaken by two private citizens is noteworthy, as is the accessibility of its content due to the emphasis on film. Willis and Van Aswegen embarked on the project with the aim of producing a public good, out of a conviction that the many lessons learnt during the water crisis in Cape Town were worth capturing and sharing.

“Before Cape Town’s water crisis in 2017-2018 came the crises in São Paulo in 2014, Barcelona in 2008, and Australia’s large cities in the 2000s. Failure to learn from past mistakes is to self-condemn to repeating those mistakes in future,” says Victor. “Extracting the correct lessons from the experience, and then applying these, is critical.”

According to Siddharth Nadkarny, London-based project leader with The Resilience Shift, the learning outputs are helping to make resilience issues tangible, practical and relevant to city decision-makers the world over. “This project aims to promote systems thinking within cities, water companies and other stakeholders through informed reflection on the Cape Town case study.” See more about the project.

Increasingly, how cities respond to and manage crises – both natural and human-made – will be crucial for their survival and that of their citizens, says Peter. “The Covid-19 pandemic is a vivid reminder of what Capetonians have seared into their memory, namely that even well-run cities are vulnerable to crises. Going forward, the best cities will be those that prepare and adapt well enough to protect their citizens when those crises arrive. We like to think our learning resource can substantially help leaders at all levels within cities understand what it takes to handle a major crisis well.”

The Cape Town Drought Response Learning Initiative resources can be accessed by the public at www.drought-response-learning-initiative.org.

The sponsors of the initiative are The Resilience Shift as lead partner, and donors Nedbank, Old Mutual, Woolworths, GreenCape, Aurecon / Zutari, PwC, Arup and 100 Resilient Cities. With thanks to Rothko.