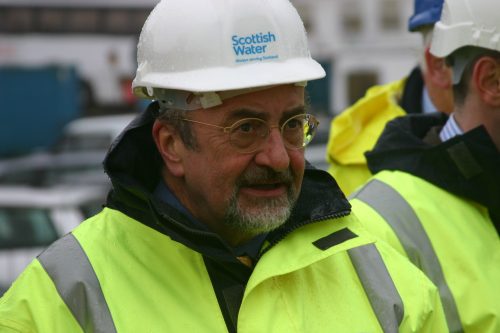 Professor Paul Jowitt shares his reflections on what makes an engineer today, why ‘lessons learned’ about failure don’t seem to be, and how systems thinking is fundamental to resilience.

The Smeatonians is the oldest society of engineers in the world, and is about to celebrate its 250th anniversary. As part of the celebrations, Paul Jowitt, Professor of Civil Engineering Systems at Heriot-Watt University, and his fellow Smeatonians will be reflecting on the contribution of engineering to the world and the work of those early engineers.

It seems a fitting time therefore for The Resilience Shift to connect again with Paul to reflect on some of the issues for the engineering community that he has grappled with over his long career. Many of which are back in the spotlight in Seth Schultz’ Institution of Civil Engineers Brunel lecture, and through our work with the International Coalition for Sustainable Infrastructure.

The pace of change – a continuing debate

Paul kicks off by expressing his anger with the slow pace of change in dealing with global issues such as climate change and the UN SDGs.   The Resilience Shift’s Juliet Mian shared a panel with Paul at the Commonwealth Sustainable Cities Initiative in the summer of 2020. He voiced his frustration then about his sense that the engineering community has been talking about many of the same issues for a very long time.

These too underpinned his stint as 145th President of the ICE in 2009-10 (see his Presidential Address entitled ‘Now is the time’), and earlier still, his delivery of the 6th ICE Brunel International lecture series in 2006-7 (see full lecture, abridged) It began: “Climate change is real”. Before the shift to a virtual delivery this year because of Covid, it was a bit of a marathon; Paul’s tour took him to 45 venues in 16 countries and total audiences of over 4000.  “Very rewarding”, he adds.

His theme then, 15 years ago was about ‘Engineering civilisation from the shadows – climate change and international development and world poverty’ and he certainly made the most of the opportunity to air his views. An interview with him in New Civil Engineer in 2009 notes how he is well known “for speaking out and creating debate and discussion, not least around critical yet difficult issues surrounding the profession’s reaction to sustainability, climate change, international development and poverty reduction”.

In over 45 years of teaching, he estimates that he’s been talking about these issues and about the importance of resilience and systems thinking for some 30 years, with people well before him also having these perspectives. But he is concerned that still not enough has changed.

An event that encapsulates resilience for him was the impact of Hurricane Katrina in 2005. He says, “Just 2 hours after the event, there was total chaos in parts of the world’s most technologically advanced country.”

“It also highlighted the paradigm shift needed for industry and supply chains. The shift to complex ‘just in time’ logistics is no use at all if everything fails. We need ‘Just-in-case’.”

Learning from the past to prevent future failure

He refers to Professor Sir John Beddington, then the Chief Scientific Advisor, who warned in 2013 that the world faced a ‘perfect storm of problems by 2030’. Professor Beddington said “”You can’t think about dealing with one without considering the others. We must deal with all of these together.” Despite the many warnings, no-one was prepared for Covid.

He is keen to capture the body of knowledge embodied in all of the past ICE Brunel lectures and he wonders how to make those challenging ambitions for change stick. Looking back even further at the ICE Presidential Addresses over the last three centuries, Paul refers to a student assignment run by a fellow academic colleague, Mike Murray, at Strathclyde University that reveals that many of them still have direct relevance to SDGs today. “Progress is frustratingly slow; the problems haven’t gone away, and some are growing in urgency. We must keep up the pressure and keep the aspirations alive”, says Paul.

He is thinking hard about how learning over time can be incorporated to better prevent future failures and emphasises the critical role of humans in the system. “I’m sick to death of hearing people still talking about ‘Lessons to be learned’ each time something has gone wrong, when all too often it was staring them in the face in the first place.”  He cites Ronan Point and Grenfell Tower.  And most recently, so-called smart motorways.

Paul talks about the need for engineers and designers to take the likelihood of human error more seriously and recognise that people are part of the system, not external to it.

“It is often a simple thing that goes wrong – and people have forgotten to consider what might go wrong from a basic human perspective. We need to model the interaction between the physical and the human systems.  And to be alert to the emergent properties of complex systems”

“We need to remind all those working in the built environment that Codes should not be used to design to the lowest common denominator. It’s not good enough to just read them and comply. They don’t encourage people to think.”

A wider approach to being an engineer

Paul sees his job as being exactly that – teaching engineers to think, and in particular to think more widely and with a systems perspective. He shares the learning outcomes for Heriot Watt’s undergraduate programme for engineering as an illustration of what he means.

The framework incorporates at one level, the subjects, whether fundamental or applied. Next there is a wider layer of professional working skills and knowledge – ethics, advocacy, systems thinking. Finally, the context of external drivers – understanding climate change and global issues. These three strands connect all the learning outcomes for the whole programme, and driven by thematic systems level design projects running through the whole course

Paul says that fundamentally they are teaching students all the aspects of the ‘engineers’ toolbox’ including systems thinking, professional behaviour, and the perspective that engineers need to be much more than technical experts. Students are given ‘client projects’ along with a contract, and the aim is for them to be fully prepared for real-life situations. He wants future engineers to be aware of the system boundaries too. In academia, the focus is often on something in detail, to the exclusion of everything else. Many academics he argues are not systems thinkers for that reason. He believes we need both in a team.

Paul is not a fan of the emphasis on STEM subjects being the primary route into engineering. He wants future engineers to have wider aspirations and attitudes and in being more rounded individuals. He talks about putting some A into the STEM to make STEAM – Art, Application, Attitude, Aspiration, Advocacy – people who do other things and have broader interests.

He wants, “People who see the world and see how they need to solve it – and are not just sat there with a calculator”. That is a subject of controversy, but Paul believes that “Not everyone in the profession needs to be the sort of person who is really good at the maths – as long as some are”. He is very positive about the wider set of skills most recent students do have. With many thousands of students having passed through his classes, he hopes he has left a legacy of fully rounded individuals leaving the university set on the road to becoming a professional engineer.

With Covid moving classes online, Paul misses the direct face to face interaction with his students and is looking forward returning to the lecture theatre – which he believes should be more theatre and less lecture. But before that, he has an appointment with a certain John Smeaton.