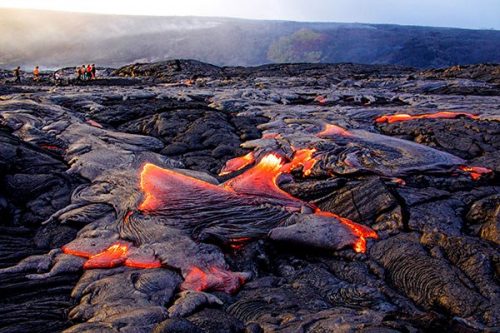 When a volcano erupts, constant communication between leading scientists and emergency responders and planners is absolutely essential. Guest blogger, Michael S. Bruno, from the University of Hawai‘i at Mānoa, shares his thoughts on the response of Hawai‘i in terms of resilience to the current events. O’ahu is far enough away from the Big Island that we have been relatively unaffected with just some smoke when the wind shifts from that direction. The residents of the region around the volcano however are going through a very difficult time. For our university’s campus in Hilo (close to the volcano), this is a very nervous time as students are in the midst of final exams, and many of them and their families live in the vicinity of the volcano.

Our faculty is very active in the response to the eruption. Our research program in this domain of science is one of the best in the world and the State of Hawaii’s State Volcanologist is one of our senior faculty, Professor Bruce Houghton.

Professor Houghton and his research team have been on the volcano since the very early stages of the eruption, and they monitored the underground lava flows that eventually led to the fissures and damaging lava flows many km from the volcano summit. They are still there today, trying to ascertain the volcano’s next move. For the latest news from local sources see Hawaii News Now, or Vox.

In addition to our volcano experts, we have teams of meteorologists and atmospheric modellers working closely with Federal and State of Hawaii officials to predict the possible movement of dangerous sulphur dioxide gases from the eruption. The movement can change dramatically with the frequent wind shifts we see in the area, and so the danger to surrounding communities can elevate over a timespan of only minutes.

This is certainly a time when the constant communication between teams of leading scientists and emergency responders and planners is absolutely essential.

When I arrived at the University of Hawaii I was struck by the very close relationship between the university and the State. This event is demonstrating the value of the trusted relationship that has developed over years of working together. It has resulted in a well-informed response to the event, including advance evacuations from the community before the roads became impassable, and ongoing, real-time planning for further action should the conditions change or worsen.