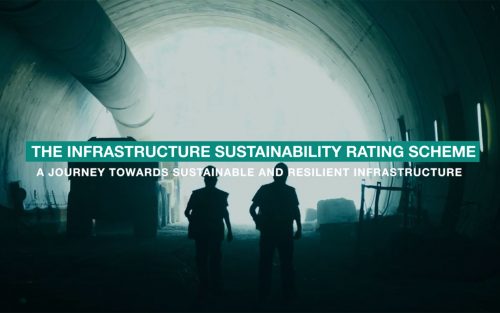 In collaboration with Nation Partners and ISCA, the film interviews infrastructure sustainability experts from across Australia. They share their experiences in establishing a successful industry-led IS rating scheme, now including a resilience credit, including the enablers and challenges of developing a tool that is now mandated by most state governments in Australia.

Watch the video below to understand their insights.

The scheme was initially begun in February 2012 and has developed over time. ISCA, industry and government recognise that infrastructure must not be only sustainable, but resilient, to respond to challenges such as natural disasters, population growth, terrorism and rising temperatures.

Version 2.0 of the scheme now includes a resilience theme and credit that requires resilience to be addressed in the planning, design, delivery and operation of infrastructure.

“The best way to gauge the current value of the tool was that in 2013 the total value of projects that were registered i.e. people who wanted to take up the tool and measure their sustainability performance, was $3 billion dollars (Aus). At the end of 2018, the total value was $100 billion dollars (Aus)” –  Menno Henneveld, Former Commissioner, Mains Roads Western Australia.

Mandating the consideration of resilience through the IS rating scheme will enable cities and regions to respond to the changing environment and future challenges.

Listen to some of those involved with the scheme: