The latest volume from the Intergovernmental Panel on Climate Change (IPCC)‘s  Sixth Assessment Report is launched today entitled Climate Change 2022: Impacts, Adaptation and Vulnerability. This detailed report from the IPCC is the second of three reviews from the world’s foremost body of climate researchers. See the report and all materials from Working Group II at the IPCC’s website.

Last August, the first volume highlighted the scale of the effect that humans were having on the climate system. Today’s looks at the causes, impacts and solutions to climate change. Commenting on the summary, UN Secretary General Antonio Guterres described it as an “atlas of human suffering”. 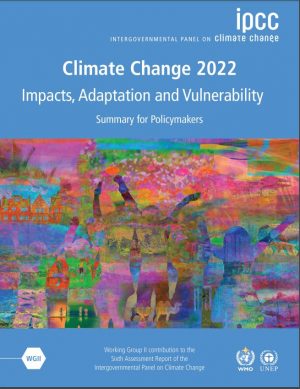 The report puts much focus on “climate resilient development,” which it says helps build the strength to cope with climate change in every society. Inger Andersen, Executive Director, UNEP, also called in her introduction to embed nature at the heart of transformation programmes. “Nature can be our saviour, but only if we save it first”, she said.

“Our report clearly indicates that places where people live and work may cease to exist, that ecosystems and species that we’ve all grown up with and that are central to our cultures and inform our languages may disappear,” said Professor Debra Roberts, co-chair of the IPCC’s Working Group II that delivered this report.

“So this is really a key moment. Our report points out very clearly, this is the decade of action, if we are going to turn things around.”

The report is the result of 5 years of hard work by the global scientific community, involving 270 authors from 67 countries. It captures the growing scientific knowledge from 34,000 scientific papers, 62,418 review comments, and 675 further contributing authors. The scientific evidence is unequivocal: climate change is a threat to human well-being and the health of the planet.

At today’s launch, the figure was give of 3.3-3.6 billion people estimated to live in hotspots of high vulnerability to climate change. Key concerns cited include rising heat stress, water scarcity and loss of snowmelt, the undermining of food security, and increasing flood risk. There is increased action on adaptation but progress is uneven and not fast enough, with the largest gaps among lower income populations.

The report calls for climate resilient development to be considered across government and all of civil society, and to involve everyone. With a strong message that, “Starting today, every action, every decision matters”, Professor Roberts emphasised that this report offers solutions to the world.

In a parallel initiative to the IPCC Sixth Assessment Report, The Resilience Shift is part of a collaboration to co-create a Summary for Urban Policymakers (SUP) series that will present the latest Intergovernmental Panel on Climate Change (IPCC) assessments in targeted summaries that can help inform action at the city scale. It will be published as a four-volume series over the course of the 2022 calendar year culminating in a report to be released at COP 27.

See more about the collaboration and watch the COP26 launch event of the Summary of Urban Policymakers.