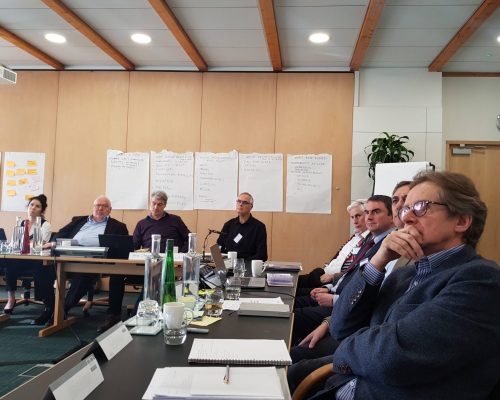 Convening groups who do not normally meet, but who share a common interest, is a key part of how we work.

To understand the potential contribution of professional institutions and associations to critical infrastructure resilience, the Resilience Shift convened a diverse group of organisations to a resilience round-table held over two days in Cambridge, United Kingdom, 28-29 November 2019.

Facilitated by Peter Guthrie and Kristen MacAskill of the Resilience Shift Technical Advisory Group, University of Cambridge, with Juliet Mian, Resilience Shift Technical Director, the objectives of the meeting were open ended but the premise was to establish ways that institutions can work together to accelerate change in how resilient infrastructure is delivered in practice.

The desired outcome was that participants agreed what sorts of priority actions could increase the resilience of critical infrastructure systems.

UNOPS (an infrastructure advisor and implementing arm for the UN) and the Edge (a campaigning Think Tank) also contributed, with an interest to advance resilience thinking within the engineering profession on resilience. Also present were representatives from Lloyd’s Register Foundation, Arup and the University of Cambridge.

Each participant introduced their organisation and its engagement with resilience and shared the focus of their institution in planning for resilience. An overview of Resilience Shift-supported activity and progress then provided an opportunity to focus conversation around what is needed, who should play a role and what relationships need to be formed.

This included an introduction to five resilience primers for industry that have been developed during 2019. Our work has told us that key stakeholders are often either unaware of the value that resilience can bring or are constrained by a lack of resources or support in terms of how to embed and enhance resilience. These initial resilience primers were commissioned to set out the key incentives or other levers that exist for particular industries – Ports, Potable Water, Electric Utilities, Roads and Rail – to help key players understand what they can do differently to improve resilience in their industry.

A concluding facilitated discussion proposed possible next steps for collaborative efforts, responding to the needs and interests set out over the prior sessions.

One of the main ideas that emerged was the clear agreement on the need for communication and collaboration between institutions, and a genuine desire to support this.

We would like to thank all those who participated in this round-table. More about resilience round-tables.

A workshop report including more insights and recommendations emerging from the round-table will be published in spring 2019.

To receive notification of this and other news straight to your inbox, subscribe to our blog headlines round up.