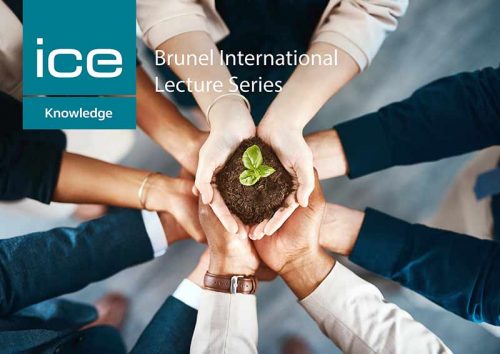 Senior Middle East politicians have used ICE’s Brunel Lecture series to call on civil engineers to drive the region’s move towards net zero infrastructure. There are huge opportunities in the Middle East to build more sustainably and engineers must assist the region’s transition to a net-zero economy.

Speaking on the Middle East leg of the lecture tour, Dr Abdullah Belhaif Al Nuaimi, cabinet member and minister of climate change and environment of the United Arab Emirates, said that the shift to green building was very much needed in the region, and it was up to engineers to drive it.

“In addition to equipping our infrastructure to withstand the avoidable impact of climate change, you [engineers] have a crucial task on your shoulders, designing efficient and durable buildings. The building and construction sector is the largest contributor to energy-related greenhouse gas emission worldwide at 59%.”

Al Nuaimi was joined by Fahad Al Jubeir, mayor of Saudi Arabia’s Eastern Province, who agreed that engineers had a key role to play and added that in order to be truly influential that they needed to embrace a broader range of skills.

“Engineering courses are too focused on technical skills, and not enough on policy and environmental issues,” he said.

The suggestion that engineers should have a stronger role in policy and planning to influence politics and economic and social development is a key tenet of the lecture series. The series is being delivered by Seth Schultz, CEO of The Resilience Shift, who has forged a career in bridging the divide between engineers and policymakers.

Urban planning and sustainable development expert Huda Shaka is associate advisor at the Royal Commission for Makkah City and Holy Sites in Saudi Arabia. She told the lecture that academic training for engineers in the region did not offer policy courses, and that some engineers did not have a culture of being involved in policy outside work, for example, in networking activities.

“Civil engineers understand the issues and the solutions, but a lot of the time they’re not involved in the discussion,” she said.

Zainab Al Himdani, graduate member, Atkins and ICE Oman committee member, agreed that engineers needed to be aware of environmental issues, and the profession should highlight the importance of collaborating with politics and policy.

Mark Jamieson, ICE MEA council member and UAE country representative, was also enthusiastic about the role for graduate engineers, but cautioned that they needed to be engaged and mentored as they leave university and come into the profession so their talent was not lost to other sectors, as had been the case in the past.

There were huge opportunities in the Middle East to build more sustainably, due to the many large engineering projects underway, Jamieson said.

Engineers have an ‘outsized’ role to play

Schultz gave his opening lecture on 2 December 2020 and is now on a global tour, taking in seven stops around the world, as he presents 21st Century Leadership is Partnership: How a Coalition of the World’s Engineers Can Change the World. Regional lectures include a bespoke version of the opening lecture with more time allocated for discussion between Schultz and key industry leaders.

In a recent global survey, engineers featured in the top 10 professions, with 84% of respondents saying they had high trust in engineers, Schultz noted. Engineers increasingly needed to make a big impact outside the profession, so should make the most of the trust placed in them and be more visible in politics and high-level decision-making, he said.

“Engineers have an outsized role to play, both in terms of changing their profession from within, but also by becoming leaders outside the profession. Just like mayors around the world, bring your pragmatic expertise and get-it-done know-how to bear on the looming crisis in front of us,” he said.

Speakers at the lecture were:

The event was chaired by Mark Hansford, director of engineering knowledge, ICE

With thanks to the ICE and Author, Catherine Early