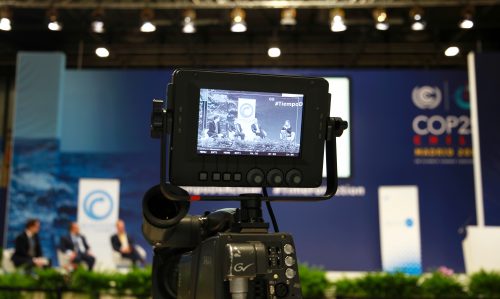 The Resilience Shift and its partners such as SIWI, AGWA, Arup and others) have sought to play an increasingly influential role at the annual Conference of the Parties as the culmination of working together throughout the year. Why?

What is the Conference of Parties?

The Conference of the Parties (COP) is the decision-making body of United Nations Framework Convention on Climate Change (UNFCCC). It is where the international community comes together to discuss key themes and make policy decisions around climate change.

There are two parts to the event. Firstly, negotiations take place within a high security, invitation only area, restricted to national delegations and approved observers taking part in the negotiations and formal sessions. Secondly, there is the more informal but still high security access for registered non-state actors to mix with the above (such as the public, NGO’s, businesses etc.)

Why does it matter for the Resilience Shift and its partners?

The Resilience Shift and its partners such as Arup, SIWI, AGWA and others) have looked to play an increasingly influential role at the annual COP. This close collaboration, the culmination of working together throughout the year, resulted in several constructive sessions during COP25 in December 2019.

The next COP, taking place in Glasgow, UK, in November 2020, jointly led by the UK and Italy, is an opportunity to further shape the agenda. In particular with this year’s focus on implementation, partners can influence and provide input to countries’ Nationally Determined Contributions (NDCs), helping to support how action on the climate crisis can be realised in practice.

What is the opportunity?

Being at COP26 provides visibility for the work that the Resilience Shift and its partners have devoted to highlighting the importance of resilience in climate action, but more importantly to provide direct contribution to the debate. Water has primarily led this influence activity with a focus on promoting the role and understanding of climate change on the water cycle, and how we mitigate the effects of and adapt to those changes in our water environment.

What is the link with water and climate action?

Since COP21, in Paris in 2015, where water issues entered into multi-stakeholder engagement processes, there has been increasing acceptance and understanding that the climate crisis is not just about controlling greenhouse gases and global warming, but also the impacts to our weather systems and water cycle. The focus has shifted from solely prevention to adaptation and how we live to be compatible with the changing world.

Moving to implementation – water in the NDCs, NAPs, and LTSs

For countries that have signed onto the Paris Agreement (referred to as “Parties”), 2020 is the first year they are invited to communicate their mid-century greenhouse gas emission development strategies (Long Term strategies or LTSs). These encompass both adaptation and mitigation. Starting in 2020 and every five years thereafter, Parties need to submit Nationally Determined Contributions (NDCs), which outline how they will successfully meet these LTSs in the near-term. Additionally, implementing these objectives through subsequent climate activities may include developing National Adaptation Plans (NAPs). Governments are supported by organizations such as the NDC Partnership, NAP Global Network, and a number of technical or advisory partners.

Access to a reliable water supply is critical to nearly all sectors working to combat climate change. That means water is a fundamental cross-sectoral component of all national climate planning and implementation including the LTSs, NDCs and the NAPs. Water considerations throughout planning mean thinking about water insecurity – where there is too much, too little, and/or too dirty water – which is already a significant problem in many parts of the world. Because water is cross-sectoral and tied to economic prosperity and sustainable development, national climate change planning is strengthened when all aspects of it are based on resilient water management.

What did we and our partners achieve at COP25?

COP25 in 2019, hosted by Madrid and chaired by Chile, was focused on preparing for the implementation of the Paris Agreement with all parties committing to set out their contributions in 2020 at UK’s COP26.

In collaboration with SIWI, The Resilience Shift, AGWA, Arup and others, we organized and/or participated in sessions on the methodology and application of the City Water Resilience Approach and its implementation in partner cities (at the UNFCCC Resilience Lab) and several other panel sessions on different topics including contributions to the Development and Climate Day.

The main theme of ‘Building a Resilient Future through Water’ underpinned this programme and culminated in a high level session that brought together decision-makers from the main global agenda processes, the thought-leaders in water and climate community, multi-discipline and sectorial stakeholders to share knowledge, strengthen and scale actions, and foster progress on water-relevant global goals (specifically SDGs and the Paris Climate Agreement).

Our partner on the City Water Resilience Approach, SIWI – the Stockholm International Water Institute, had a very prolific and constructive COP with numerous events and dissemination of key policy briefings on its Source-to-Sea approach to resource management and climate planning, its work on the forest and water nexus, and on nature-based solutions (NBS).

With implementation moving to the fore, AGWA – the Alliance for Global Water Adaptation – released two new guidance and planning documents for integrating water into climate responses. Watering the NDCs: National Climate Planning for 2020 and Beyond sets out how water-aware climate policies can strengthen climate change mitigation and adaptation goals. Developed through a crowdsourcing effort including national, sectoral, and civil society partners from more than 100 countries, it provides guiding principles and recommendations for national climate planners and decision-makers to help ensure they meet their goals set out in National Adaptation Plans (NAPs) and Nationally Determined Contributions (NDCs). Another publication, Adaptation’s Thirst: Accelerating the convergence of water and climate action, was produced jointly with the International Water Management Institute (IWMI) as a broader background on water and climate interactions and provides a framework for integrating climate-resilient water management into national planning.

Our host organisation, Arup, is a contributor to The Marrakech Partnership  for Global Climate Action (the official civil society engagement platform of the UNFCCC) which presented a number of documents to delegates, countries, NGOs and private sector partners at COP25, including the Yearbook of Global Climate Action 2019. This takes stock, highlighting climate action success stories and the need for conditions conducive to stepped up climate action, while the Climate Action Pathways suggest transformational actions and milestones and the initiatives that can support efforts towards neutrality in key areas such as energy, industry, transport, human settlements, water, land use and resilience to the inevitable effects of climate change. Sessions included Circular Cities, SDG6, urban water resilience, and more. 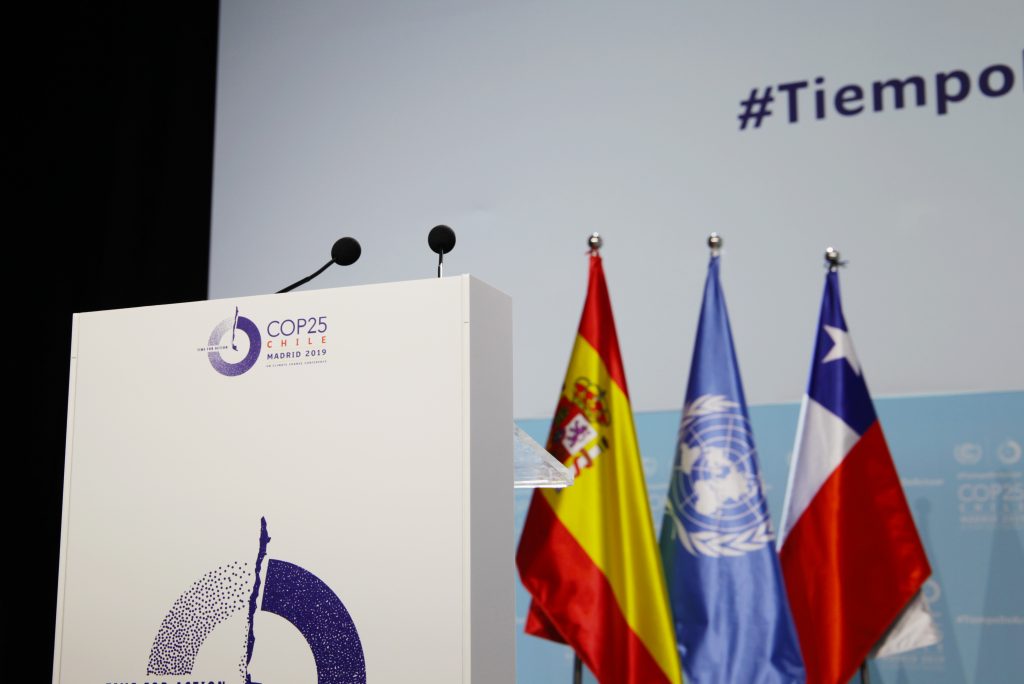 COP25 was widely perceived to be a conference where a ‘clear direction remains despite disagreement and delay’. Despite the frustration with progress on the overall negotiations, the water community managed to  make significant progress. Emerging themes from the discussions in 2019 include:

COP26 is taking place 9-20 November 2020 hosted jointly by the UK and Italy, in Glasgow. Working groups have been set up with partners, and within Arup, and as the culmination of a year’s worth of engagement, work is already under way with all partners discussing what happens next.

A new significant partner is the Global Commission on Adaptation, whose “Water Action Track” launched in autumn 2019 will be reporting on its achievements in autumn 2020, just on the eve of the COP. The theme of the August 2020 SIWI World Water Week will also be ‘Water and Climate Change: Accelerating Action’ and as such is an opportunity to strategically bring together and coordinate messaging and action among the key water and climate stakeholdersas preparation for the COP. The focus in 2020 will be on implementation, but what does action look like? Which solutions and frameworks will be taken forward? What are the water resilient actions that a city is willing to take and how will it be paid for? How can we contribute to a pathway to deliver those actions and how will they feed back into the countries’ commitments?

The UK Committee on Climate Change, the Environment Agency, and other major UK organisations will take a lead on the themes and frameworks. The Scottish Government is also likely to be strongly involved and its local narrative and geographical context may influence thematic topics – Glasgow itself is a river estuary city vulnerable to flooding from sea-level rise and with other urban water resilience challenges.

Post-Brexit, it’s an opportunity for the UK to reassert itself on the national stage and maximise its leadership and momentum. As 2020 progresses and plans come together, we look forward to COP26 being the year where the actions to tackle the climate crisis are scaled up and more widely implemented by all parties.

With thanks to John Matthews and Ingrid Timboe at AGWA, Jason Fairbairn and Martin Shouler at Arup, and Jennifer Jun, Maria Sköld and Maggie White at SIWI.