According to Sven Kramer, “It is important to include all benefits in the valuation of a project to increase the likelihood that nature-based infrastructure is more attractive than grey infrastructure. An example here is of sand dunes, which do more for less and also have much higher revenues, mainly from recreation and tourism, compared with the grey alternative.”

UnniKrishnan Divakaran Nair, talked about ensuring country ownership in mainstreaming nature-based solutions. “For this, the Commonwealth has the Blue Charter Initiatives and the Commonwealth’s Living Lands Charter (soon to be launched) to integrate nature-based solutions; costing of resilience in terms of green and grey infrastructure is cheaper; we need to have different financial instruments to look at nature-based solutions to secure livelihoods and protect nature; knowledge management is important to learn from each other replicate models such as the Hub & Spokes model; and finally capacity building and enhancement of government officials around this is imperative.”

Seth Schultz stated that “In order to protect, preserve and restore the natural environment, nature-based solutions need to be central in international agreements. We must be a part of the implementation process that we are seeing in the Nationally Determined Contributions (NDCs). There needs to be a much greater linkage between the layers of governments – national to regional to local.” 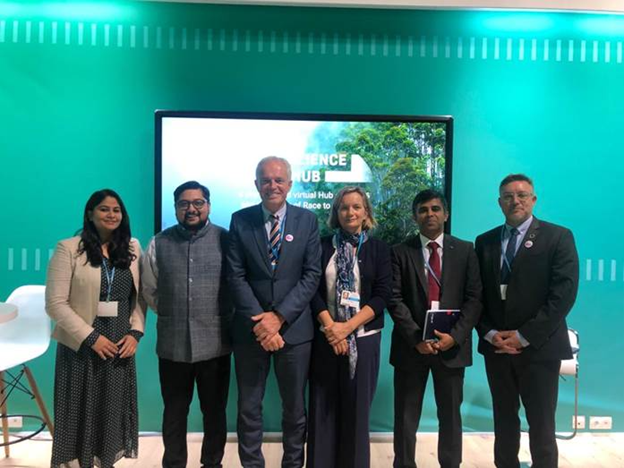 Over the past decade, NbS have emerged as an effective mechanism to boost resilience and meet some of the extra costs required for resilient infrastructure planning. In the face of climate-related uncertainties, NbS are a seemingly pragmatic way forward, to adapt to climate variabilities as compared to static grey infrastructure solutions like concrete seawalls, levees, dams, and embankments. They are widely regarded as important tools for climate adaptation and disaster risk reduction around the world. They attempt to deliver economic, societal, and environmental co-benefits by promoting biodiversity and providing diverse ecosystem services, and they are designed to handle various environmental concerns in a resource-efficient and flexible manner. They also offer several chances for stakeholders and civil society to participate actively, such as in the co-creation and co-design of potential solutions.

Read the whitepaper on Governance of Infrastructure for Resilience here.