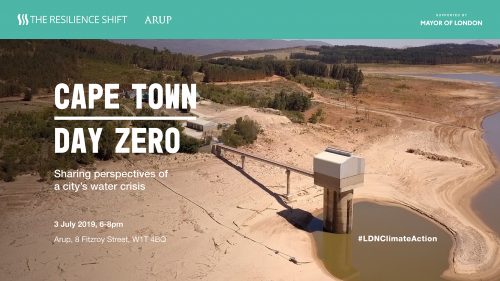 As part of London Climate Action Week, the Resilience Shift is hosting a film screening and panel discussion exploring the lessons to be learned for cities such as London, from Cape Town’s water crisis.

Following three consecutive years of poor rainfall, the city of Cape Town was in the midst of a severe water crisis. The city of four million people was projected to run out of water on April 12, 2018 – ‘Day Zero’. A collective response from the residents of Cape Town helped avert this crisis.

In-depth filmed interviews with key Capetonians, as part of the Cape Town Drought Response Learning Initiative, highlight how the crisis developed and how the city’s water authority, politicians, businesses and residents responded, the lessons they learnt from the crisis, and the lasting impact it has had on how the city manages and uses water. The panel discussion will explore what London and other cities can learn from Cape Town’s experience.

There will also be a chance to learn more about the work of the Resilience Shift on city water resilience, resilience tools and approaches, and on industry-specific resilience practice.

To find out more and to register for the event please email info@resilienceshift.org or see More information