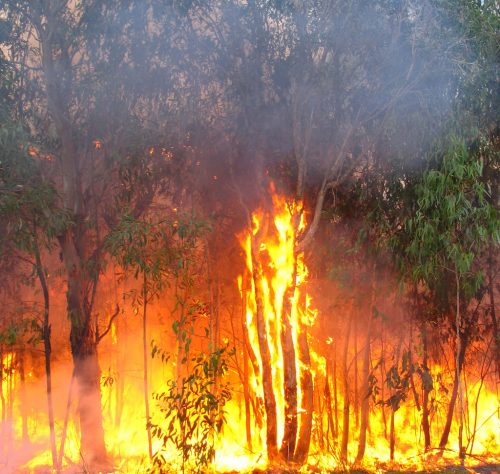 Since September 2019, bushfires in Australia have burned through some 10 million hectares of land. The fires have made headlines globally. With many months to go in the fire season, what does this mean for Australia’s infrastructure, and are there wider lessons for the resilience shift?

We spoke with friends and colleagues in Australia to understand their perspective as planners and engineers. insights about the impacts within and between infrastructure systems are shared below. 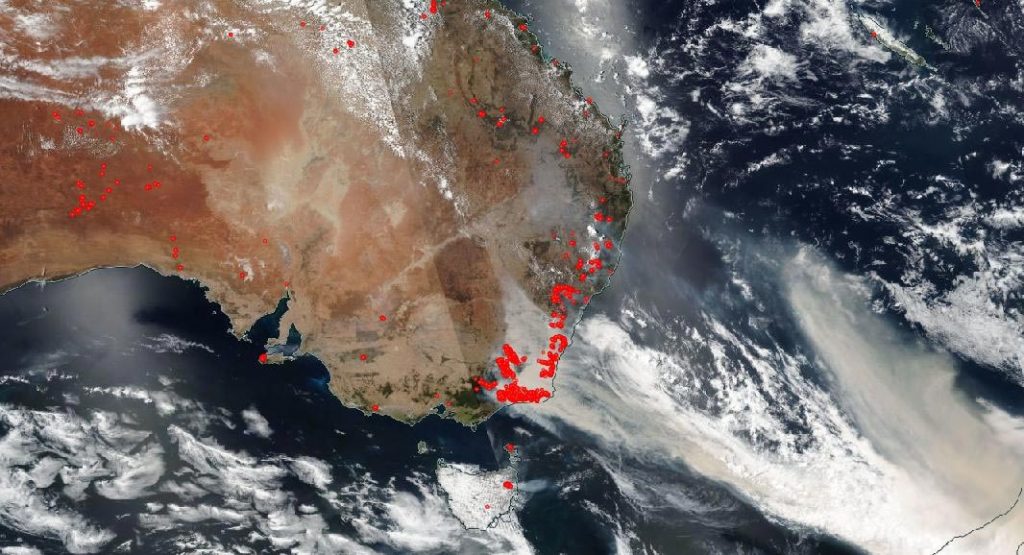 The electricity network has been hit hard, with key power infrastructure impacted by fires across the east coast causing power outages for tens of thousands of homes. Rural towns and those living on the edge of the grid have been most affected where there is no back-up or planned contingency.

Slow recovery times across the electricity network highlights a lack of resiliency, with thousands of customers still without power weeks later. Households were asked to cut down on power consumed from the grid and only use it where necessary. Due to nature of the electricity market and the bushfires’ impact on state interconnectors, power prices temporarily skyrocketed in some areas. 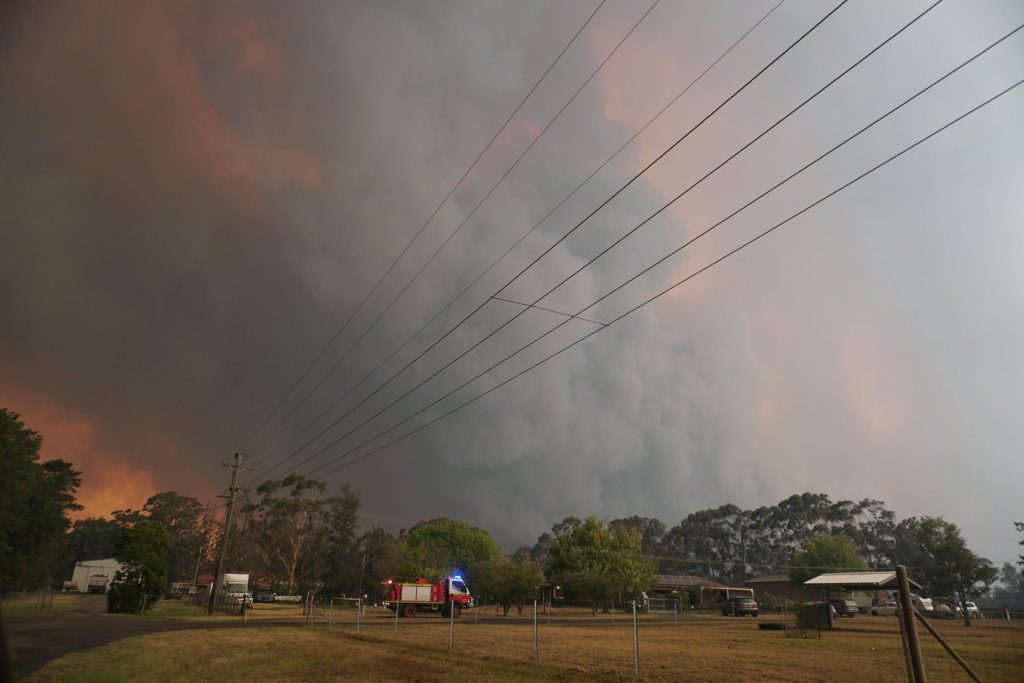 AEMO acknowledges the weaknesses in the east-coast power network, calling it a ‘wake-up call for urgent investment’ and a clear need for more government support. The country is still one of the world’s biggest per capita greenhouse gas emitters even under its internationally agreed reduction targets. According to NASA data, it is estimated that the fires have pumped an extra 350 million tonnes of CO2 into the atmosphere – roughly two-thirds of Australia’s annual emissions budget in 2018-19.

The bushfires highlight the importance of whole-system thinking. Leah Howell, Energy Specialist, told us that additional state-to-state connections additional state-to-state connections and creating a more ‘enmeshed’ transmission infrastructure, as well as strategically located energy storage, more distributed renewable generation sources, and microgrids would all enhance the ability of the system to continue to function during these events.

Other measures such as back-up renewable generation at the fringe of grid, burying powerlines where possible, and utilising technology to isolate parts of grid/shut down areas at risk while keeping others running could all contribute to the wider system resilience. Some of these are set out in the resilience primer on Electric utilities: an industry guide to enhancing resilience.

The loss of power supply had a direct impact on the communications sector, which is essential, particularly for remote communities, in times like these.  The EARTH EX global resilience exercise highlights in its key findings how critical communications are in a crisis situation – see EARTH EX® III 2019: Lessons learned from a global resilience exercise.

In Australia, mobile towers generally have back-up power of 10-hours, but this wasn’t enough given the duration of fires’. 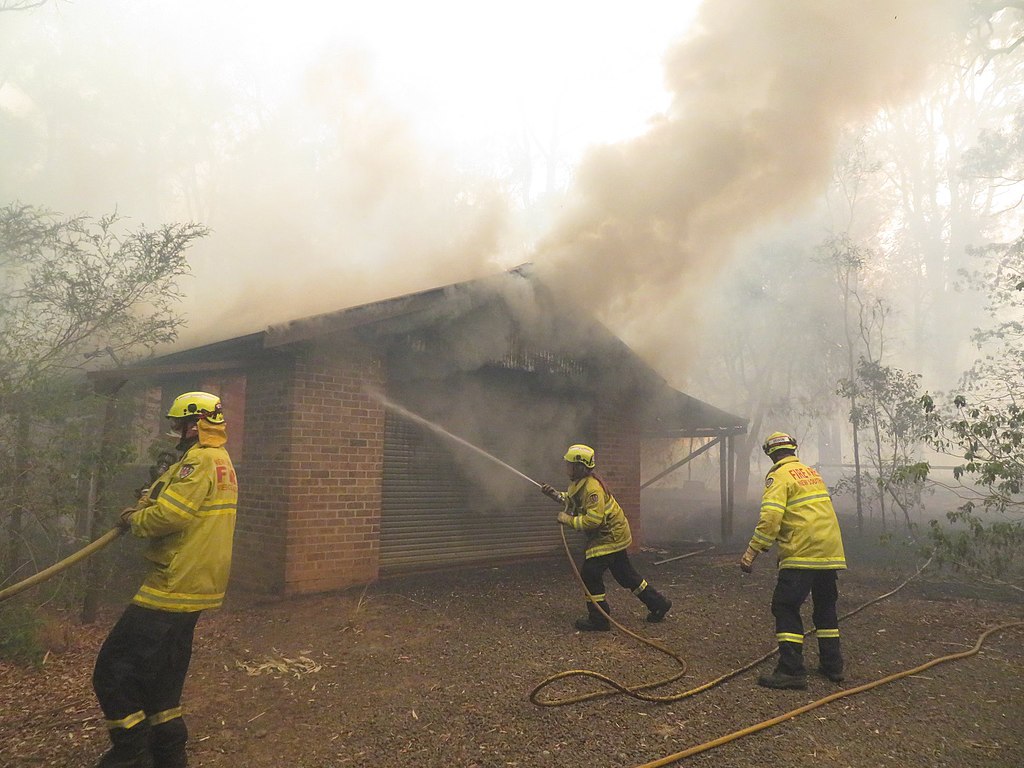 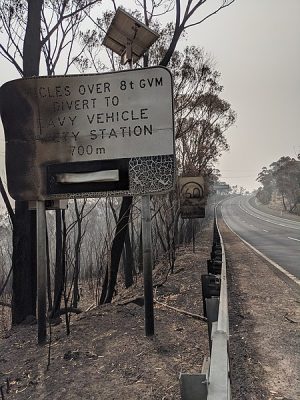 With people forced to flee from the fires, some were stranded for days amid food and fuel supply shortages. In New South Wales, fallen trees blocked roads, making it potentially difficult to reach cut-off populations. With roads impassable, the military deployed ships and aircraft to bring supplies and evacuate people from fire-devastated areas, and responded to power and communications shortages.

Food safety risks have been heightened by toxic fumes from burning materials and chemicals used to fight fires. The Food Safety Information Council advised consumers to throw out any food that has been near a fire including refrigerated produce where there have been power cuts.

Food shortages and increased prices are further predicted as supply chains have been hit with suppliers struggling to transport food across the country, with crops destroyed by fire and routes shut down, compounding the existing pressure on growers and farmers from the hot and dry conditions and widespread drought.

The closure of a critical supply chain arterial route between Queensland and the southern states was mirrored on the other side of the continent. The only sealed road connecting Western Australia and South Australia — the Eyre Highway — was also closed for 12 days over the New Year period, trapping trucks and travellers on either side of the Nullarbor Plain.

Australia’s public drinking water quality is under threat from the bushfires. As well as disrupting supply infrastructure causing contamination and affecting water treatment processes, impacts to catchments from bushfires and subsequent erosion can have long-lasting effects, potentially worsening untreated drinking water quality for many years, even decades. 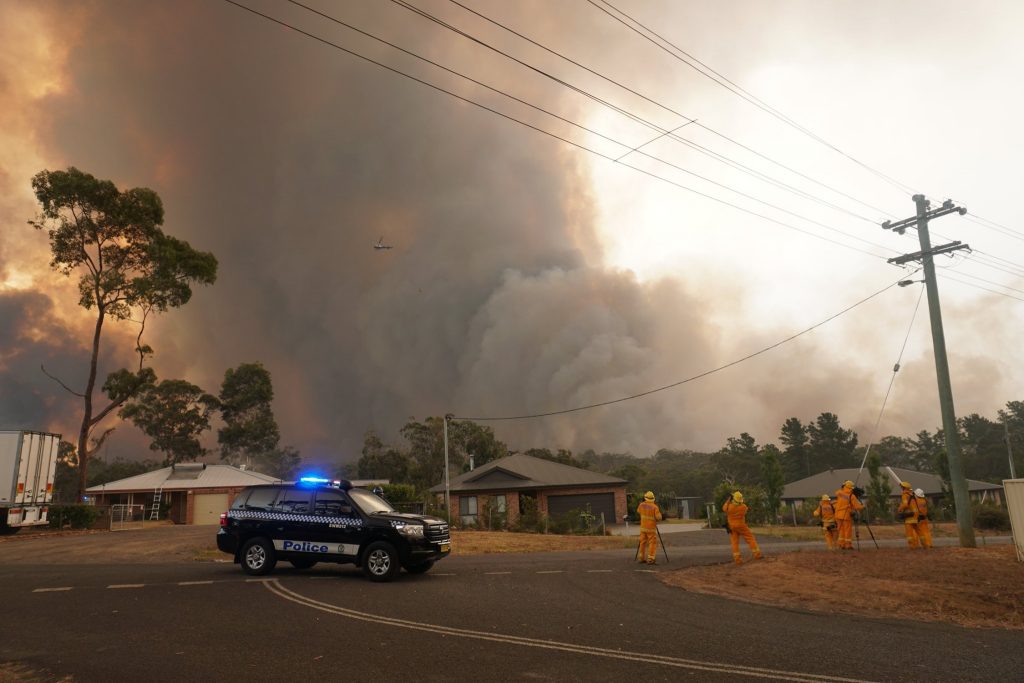 In the short-term, power cuts can stop important water treatment processes such as chlorine disinfection, needed to kill microorganisms and make our water safe to drink. When drinking water is affected, residents are advised to boil their water before drinking it or using it for cooking or teeth brushing.

In some cases, untreated water – not safe to drink – straight from a river supply, may be fed directly into drinking water systems. Water treatment plants are bypassed completely, due to damage, power loss or an inability to keep pace with high volumes of water required for firefighting.

Severe impacts to waterways may not occur until after intense rainfall. Heavy rain can wash ash and eroded soil from the fires into waterways, affecting drinking water supplies downstream. Such an increase in suspended particles slows the rate of drinking water filtration leading to limitations being placed on water use. If water is contaminated with chemical substances rather than microorganisms, boiling is usually not effective and people would have to drink bottled water.

These combined impacts of the severe drought and bushfires contribute to cities such as Sydney, facing the toughest water restrictions in more than a decade. Almost all of New South Wales has been officially drought affected since 2017 with some regions suffering little or no significant rainfall for even longer than that. 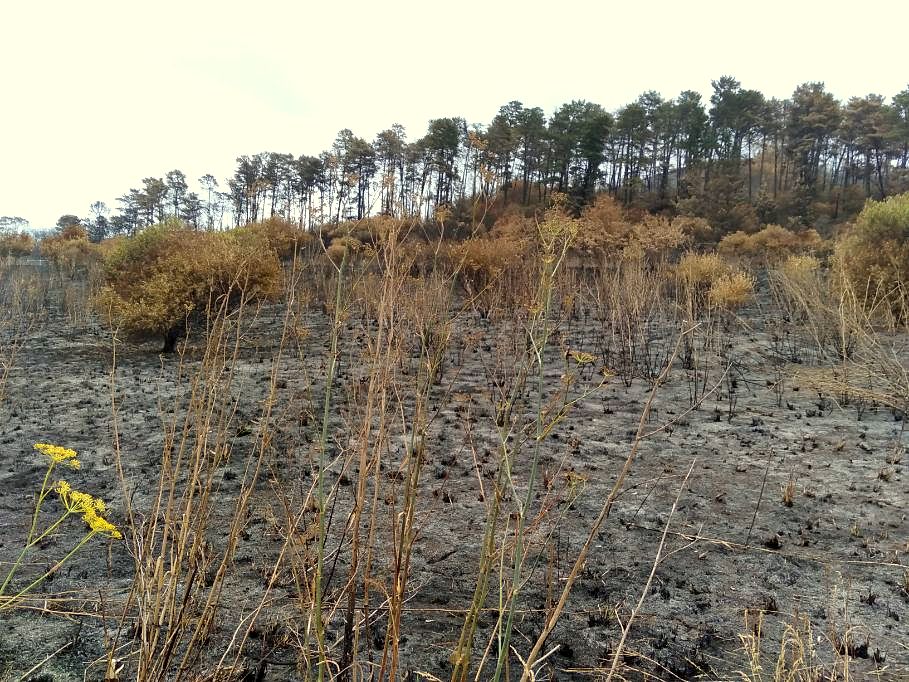 The damage to the environment and native Australian fauna from the combined drought and bushfires is colossal with animals killed either during blazes or afterwards from lack of food, water and shelter and increased risk of predation. With habitats destroyed the true scale of loss won’t be clear for some time.

The impacts of the fires on the waterways is severe, with the influx of nutrients into the waterways creating algal blooms. The associated oxygen drop and temperature rise leads to mass fish kills and affects other aquatic life such as freshwater turtles. Additionally, high intensity fires damage water catchments by destroying ground cover, changing hydrology and altering the soil structure.

The importance of having sufficient water supplies for fire-fighting is an illustration of the interconnectedness of systems.  Any fragmentation between decision-making for long term water resources and emergency response planning, will become evident during such crises.

To improve the resilience of water resources to fires, management action is required before, during and after fire events. A desktop review by the University of Melbourne recommended that before the fire, actions to be taken include fuel reduction burning, the construction of fuel breaks, as well as risk assessments to identify townships whose water supply is most vulnerable. Operations during a fire should adhere to the best practices in relation to the construction of mineral earth breaks and the use of fire retardants. Following fire, managers need to act quickly to prepare an area before it rains and particularly before intense rain, although in many landscapes this may not be feasible or may conflict with other values ascribed to the catchment. The first task is to undertake a rapid assessment of the burnt area to identify priorities. Then various works such as rehabilitating control lines, sediment control measures, erosion mitigation works and water quality monitoring may commence. Development of integrated fire and water quality risk management plans would enable better coordination of all management actions designed to mitigate post-fire water quality impacts. 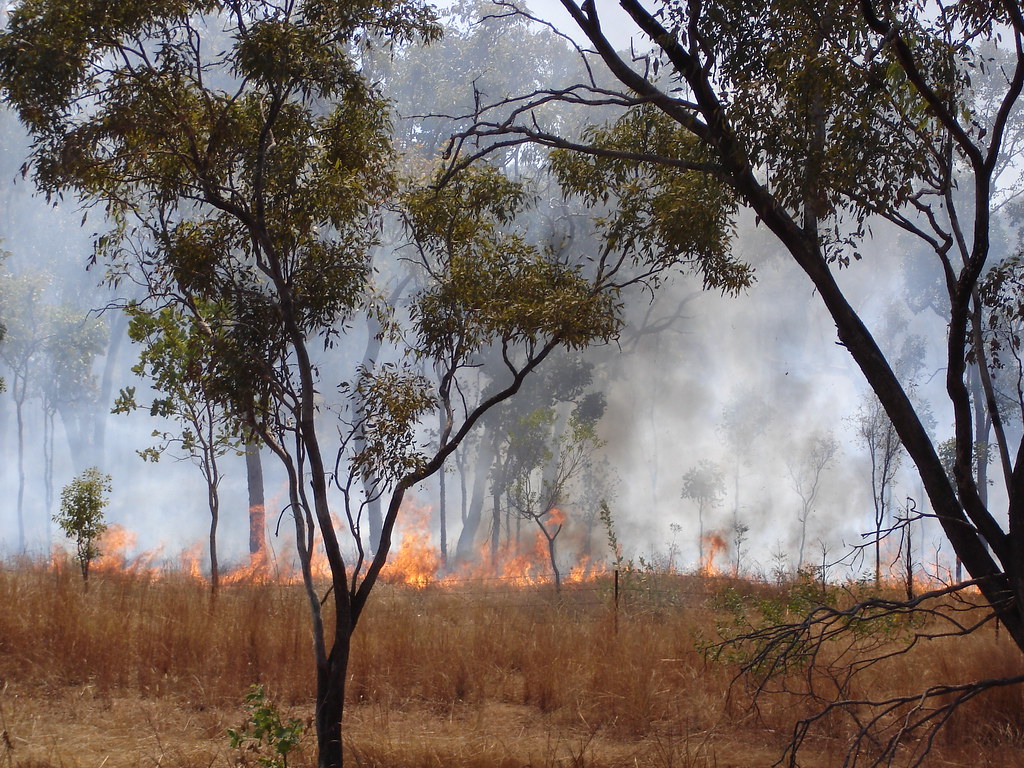 Once again, the bushfires emphasise the importance of whole system thinking, and the understanding that any one system, whether it is water, transport, communications, energy or ecological systems, will not be resilient in an extreme event, if the other, interdependent systems are not.

Recognising this, and overcoming fragmentation in governance and decision making between sectors, is a tangible step towards enhancing resilience.

That focus has extended to Parliament House with Prime Minister, Scott Morrison, quoted as saying in response to climate change, “I think more significantly that resilience and adaptation need an even greater focus.”

“We must build our resilience for the future and that must be done on the science and the practical realities of the things we can do right here to make a difference.

Resilience experts warn that this must not just mean building more things but must take into account a broader understanding of what resilience means.

With thanks to Leah Howell and others at Arup Australia.